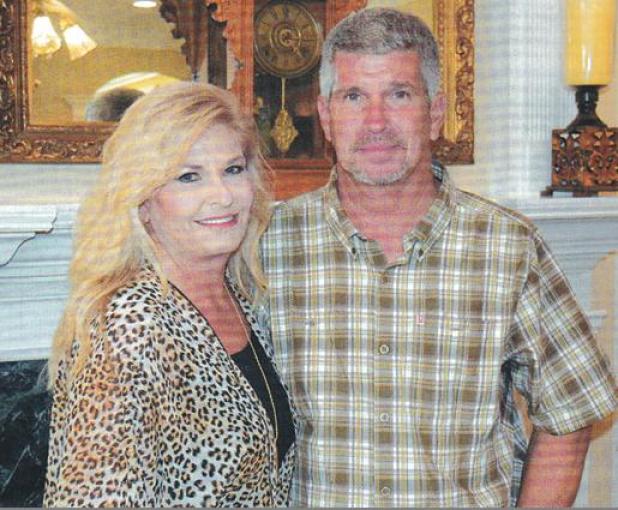 Outstanding Louisiana Logger Randy Wilson (right) shares the honor with his wife of 28 years, Bridget. She is a key part of his logging business, he notes. {Photo by Jeff Zeringue}

{Editor’s Note: The following article is reprinted by permission from the Louisiana Forestry Association’s Forests and People magazine.}

Running a family business can be a challenge, but it’s a rewarding one that third generation logger Randy Wilson wouldn’t have any other way.

“It’s really exciting to have both of my sons (Chase and Zachary) working with me,” Wilson said while on a job not too far from his home in Effie. “They’re completely, 100 percent in on everything.”

It seems to be a family tradition. Wilson has been logging ever since he graduated high school in 1983.

He started out with his father, Winston Wilson, who logged for almost 50 years. An entrepreneurial spirit moved the younger Wilson to break out on his own in 1987.

Now, Wilson, 52, has four crews and employs 25 people, who are all important to him, he said.

“I get personal,” Wilson said.

He is the boss, but he’s also friend and therapist, if need be, and does his best to do good by those who work for him. In doing so, several of his crew have been with him more than a decade.

At least two of them have been working for Wilson for more than 25 years, almost the entire time he ventured out to run his own business.

Scott Bertrand, a forester for RoyOMartin, the company Wilson said he works for almost exclusively now, nominated Randall Wilson Logging because of Wilson’s work ethic and the quality of the job the company does.

“They run a pretty class-act job out there,” said Bertrand, who has been working with Wilson for almost two decades. “I had worked with his dad and his uncle off and on for probably 10 years or so before that.”

In addition to the impressive job for RoyOMartin, Bertrand said Wilson’s succession plan appears to be a good one.

“He has two sons intimately involved in the business,” he said. “It looks like we’ll have them for the long term.”

Wilson said that is likely. His older son Chase, 28, runs one of his four crews. His younger son Zachary, 24, is quickly learning the business.

Chase has been working for his dad about seven years. He said he likes to operate the loader because it gives him a bird’s eye view to the job site. Working a good, clean site and performing best management practices is important to him, but it’s working with his father he likes best.

“We have a way better working relationship,” Chase Wilson said, “because he’s more than just a boss.”

His younger brother Zachary runs the loader with a different crew. He’s studied accounting at Northwestern State University before that and is only about a semester or so away from successfully completing his degree. For him, logging is exciting.

“Every day is a new challenge,” Zachary Wilson said.

Randy Wilson also includes his sons in every aspect of the business, he said.

“There’s not a decision I don’t discuss with them,” he said.

However, the family business would not be complete without Wilson’s wife, Bridget.

Their relationship started soon after Randy ventured out on his own in business.

Growing up only about 15 miles apart, the two became acquainted after high school.

To most folks, though, the relationship might have seemed to have a rough start. On their first date, Randy’s car smashed into a truck blocking the road as two people were visiting on a stretch of country highway.

After both recuperated from their injuries, Randy had the courage to ask her out again.

Asked in his quiet, easy-going Central Louisiana drawl, the Cajun lady, whose grandfather spoke no English, said yes and this year the couple celebrated 28 years of marriage.

Bridget is a big part of Randall Wilson Logging.

“She takes care of everything that’s not here,” Randy Wilson said at a logging site.

Bridget Wilson also is quite the outdoorswoman who is just at home in a deer stand or in a boat miles offshore as she is in her art studio at home.

In fact, on weekends when the family heads to South Louisiana for some recreation, Bridget has been known to outpace her husband.

“She’ll be fishing at 2 o’clock in the morning,” Randy Wilson said. “I’ll tell her that I’m exhausted and have to go to sleep. She says she’s fine and will keep on fishing.”

For the business, however, Bridget said she is just as involved as the three men in the family, except for the actual harvesting of the trees.

“He doesn’t allow me in the woods,” Bridget Wilson said, that is unless she is hunting deer.

The family remains really close as Chase has purchased the house next door to his parents. Zachary isn’t far behind as he recently bought the property on the other side of the Wilsons’ home in Effie.

That close-knit tie is what helps the business run so well, Bertrand said.

That closeness also extends to the people Randy Wilson employs, like Ray Voinche, who has been with Randy Wilson Logging for 27 years. Before that, Voinche worked with Wilson’s father, Winston.

“I build roads to stay ahead of the crews,” Voinche said.

But he does more.

“He’s the reason I can get so much done,” Wilson said.

Like other logging operations, Wilson said he has to deal with the headaches of the times: truck insurance; finding drivers; and Mother Nature. But he does what he can to keep employees happy and engaged, even when the weather isn’t favorable.

That spirit is being passed on to the next generation as the sons grow with the business.

Bertrand said he can see this happening and he hopes the Wilsons know how proud Winston Wilson would be of his son and grandsons.

“Knowing Randy’s dad, who passed away about four years ago, he’d really be proud to see the whole pile of them share in this award,” Bertrand said.