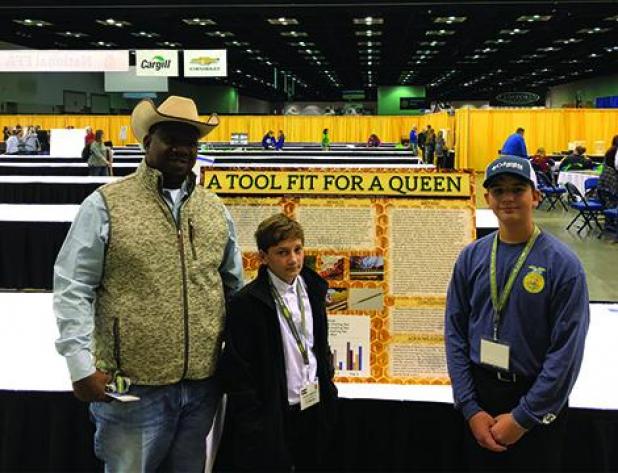 Representing Louisiana at the National FFA Convention were (from left) LaSAS ag teacher Brandon Sostand and his 8th grade students Austin Spencer and William Manuel. The boys’ project on producing queen bees for the honey industry placed 5th at the expo, qualifying for a gold medal. {Photo courtesy of Jonathan Manuel}

The two 8th graders’ project on the process of developing honey bee queens for the honey industry took 1st place at the state FFA Convention in June, which earned them the right to represent Louisiana at the national expo.

The duo received a gold medal for placing in the top five in the agribusiness division.

William is the son of Jonathan and Shannon Manuel. Austin’s parents are William and Becky Spencer.

William and his uncle Filbert Manuel produce honey as a hobby. They have about 30 hives.

“As a honey bee farmer, if I can make my own queen bees I will save money as I expand and increase the number of hives I have,” William said, noting that a queen has to be introduced to a new hive for it to produce honey.

Both boys said they enjoyed meeting other FFA students from across the country, making new friends. They also spoke with representatives of several companies involved in agribusiness.

“The convention was fun,” William said. “There was a lot of cool stuff to do.”

Austin said he enjoyed speaking with the representatives from the large companies such as John Deere, Case and Caterpillar.

At this time the winning duo are not sure whether they will continue the team or go separately.

Austin seems to favor sticking together, expanding the scope of the project and “go back to nationals and place higher.”

William also said keeping the successful team together is likely. He said next year’s project “can’t be in the same category if we compete at the national level. It would definitely still be related to the honey industry, but it would have to be in another part of the industry and not about the animals.”