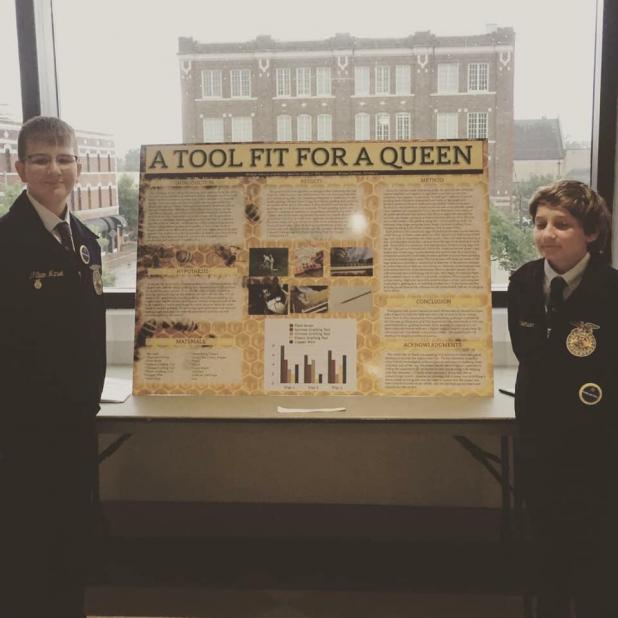 William Manuel (left) of Hessmer and Austin Spencer of Cottonport display their state FFA winning project on how to produce queen bees for honey production. The two-man team of LaSAS 8th graders will now compete at the FFA National Convention in Indianapolis on Oct. 24-27.

Two young agri-business students captured state honors at the FFA convention earlier this year and will be competing in Indianapolis for a national ribbon later this month.

William Manuel, 13, of Hessmer and Austin Spencer, 14, of Cottonport teamed up to produce an agri-science project on the process of developing honey bee queens for the honey industry.

The two LaSAS 8th graders will pack up their poster boards and exhibit and head to the national FFA convention being held in Indianapolis Oct 24-27.

“This was a team project,” William said. “It went in depth on honey bees. We grafted our own queen bee.”

William operates a small honey business with his uncle, Filbert Manuel, that they call “2 Guys Honey.”

“The honey business is his hobby,” John Manuel, William’s father, said. “Winning the state award and going to the national convention is a wonderful experience for them and an excellent learning opportunity.”

“This is a once-in-a-lifetime opportunity to go to Indianapolis and compete in the national FFA Convention,” Austin said.

William said the process that is the subject of the team’s project involves taking a bee egg from one hive and putting it in another hive, encouraging the workers in the second hive to “feed it royal jelly, which turns the bee in the egg into a queen.”

This process of creating queens can save honey producers a lot of money in the long-run.

“If the bee farmer can make his own queens, he doesn’t have to buy queens from someone else,” William said.

“The queen keeps the hive alive,” he added. William hopes his honey business grows, so his interest in the project has an eye toward his future.

“We produce about 14 55-gallon drums of honey each year,” William said. “I sell honey in some of the local stores and at farmer’s markets.”

For Austin, “this is just a fun school project.” It may or may not figure in his future profession.

However, he added, FFA does.

“I do a lot in the FFA at LaSAS,” Austin said. “It creates opportunities that will help you learn more about career paths that are open to you.”

William said FFA “runs in my family, so I enjoy being involved. It offers fun activities and you get to go places and meet new people.”

He said his father and uncle were involved in FFA and his older brother, Todd, was a state FFA officer a few years ago.