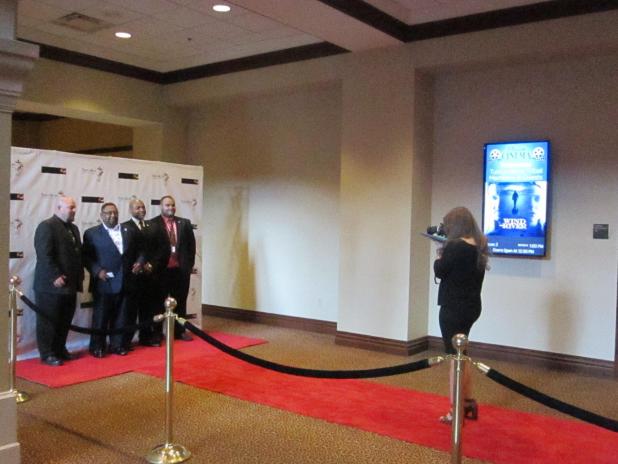 The movie was produced in part by the Tunica-Biloxi Tribe’s Acacia Filmed Entertainment. It will begin being shown at the Paragon Cinema this Friday (Aug. 18).

The Aug. 12 event was open to tribal members and invited guests. The movie was shown on two of the theater’s three screens.

The film is already being mentioned as Oscar-worthy. Director/writer Taylor Sheridan was named best director at the Cannes Film Festival. The movie also won honors at the Sundance Film Festival.

Actors Gil Birmingham, Julia Jones and Martin Sensmeier greeted the public and held a Q & A session following the afternoon screening at Paragon.

Prior to the showing, the three stars spoke to this reporter about the movie and the importance of the message included within the crime thriller.

Sensmeier was the first to come down from his hotel room for the event.

Wearing a Chicago White Sox T-shirt and cap, the 32-year-old Native Alaskan -- of Tlingit and Koyukon-Athabascan descent -- could have been just “one of the boys” hanging out at the Paragon on a Saturday afternoon.

Sensmeier’s face may be familiar to television and movie viewers as a star in the 2016 remake of The Magnificent Seven and on the HBO series Westworld.

“I am honored to be a part of this film,” Sensmeier said. “It sheds light on an important issue of missing indigenous women that occurs but is often overlooked. This movie deals with that issue without pushing it too hard on the audience.

“It deals with an important issue but also entertains,” he added.

JONES COMMENTS
Jones’ character is Wilma Lambert, Cory Lambert’s ex-wife, whose daughter was murdered several years before the event portrayed in the movie.

Jones, 36, is of Choctaw-Chickasaw-African-American heritage. She is probably best known for her role of Leah Clearwater in the Twilight film series.

“There is an epidemic of Native American women going missing on reservations and few ever know anything about it,” Jones said. “The social message of this film is very strong. In addition to that, it is a very entertaining thriller.

“We hoped to be able to tell an important story and get as many people to come out to see it as possible,” she continued. “Taylor (Sheridan) has done an incredible job of doing both.”

Birmingham has been acting for about 30 years and is a familiar face due to his many roles in films and TV series over that time.

He said he has been fortunate to be involved in roles from comedy to drama. His most recent was in last year’s highly praised and Oscar-nominated Hell or High Water, also written by Sheridan, and as Billy Black in the Twilight films.

Before finding his place on the silver screen, Birmingham had careers as a petrochemical engineer, bodybuilder and musician.

Birmingham, 64, is of Comanche ancestry and plays Martin Hanson -- the father of the murder victim -- in the film.

“This deals with a condition that exists on the reservations,” Birmingham said. “It speaks to a corrosive bureaucracy and of the assistance needed in investigating and obtaining justice for the victims of violence on the reservations.”

Birmingham said the relationship between federal law enforcement authorities and tribal governments “is complicated.There is a systemic failure in how native people address violence on the reservations.”

Birmingham said Wind River is an excellent crime mystery, “but more importantly, we are telling a human story.”

Tony Pierite, president of the tribe’s Economic Development Committee, said Acacia’s involvement in producing major motion pictures is “a great economic development opportunity for Marksville and the surrounding communities, as well as the tribal nation as a whole.”

He said he hopes “everyone in Louisiana will get an opportunity to enjoy this great film.”

“Having such a stellar Native American cast on this film helps to highlight those stories,” he continued. “We were thrilled to have Gil, Julia and Martin join us for this special private screening."

The tribe’s next film to be released is LBJ, a biographical movie about President Lyndon B. Johnson expected to be in theaters in November. The screenplay is written by Joey Hartstone. Woody Harrelson portrays Johnson. Rob Reiner directs the film.

A third project, Shock & Awe, is still in production. The film is about journalists covering the 2003 invasion of Iraq. The journalists are skeptical of President George W. Bush’s claims that Saddam Hussein has weapons of mass destruction.

Reiner also takes a role on screen that was originally to be played by Alec Baldwin, who left the project early in production.

Pierite said Acacia is currently in the process of developing its fourth project, but “we aren’t at a point where we can release any details.”