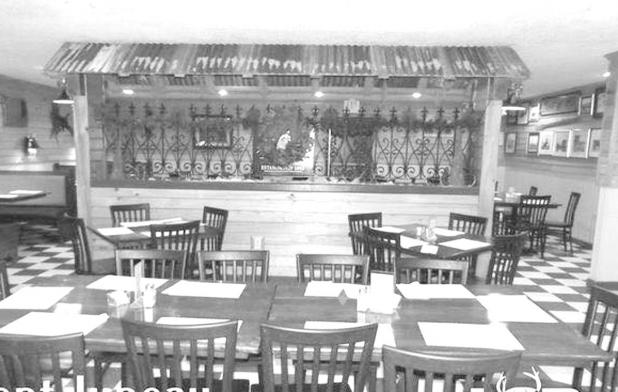 This is the inside of Kyrle’s Restaurant in Mansura. The restaurant/nightclub/catering business, that has been a part of the Avoyelles scene since 1953, is for sale.

The parish’s oldest restaurant still in business is for sale.

Kyrle’s Seafood & Steak House in Mansura is a landmark in Avoyelles and has been a part of the parish’s social life for many years.

Kent Juneau, administrator for his family and current owner, said the restaurant, night club and catering aspects of Kyrle’s are all for sale.

Juneau owned Kyrle’s for 24 years before selling it to his brother, Carey Juneau, three years ago. Carey passed away from cancer in November.

Since his death, the family has decided to sell the business. Kent, a realtor with Bonnette Auction/Louisiana Outdoor Properties, is in charge of selling the business.

“Over the years we always helped each other,” Laborde said. “We had a good working relationship. That’s what friends are for. We will miss working with them.”

Juneau said Kyrle’s will remain open while it is on the market.

“An open business is better to sell than a closed business,” Juneau noted.

Kyrle's is believed to be the parish’s oldest restaurant still in business. It opened as “Schep’s” in 1953, located in a wooden building at the “Y” intersection near its current location. It soon outgrew that building and moved to the current site.

Kyrle Roy, the restaurant’s second owner, was Kent and Carey’s uncle. He had acquired the business from his brother, Schep Roy, around 1972 and renamed it Kyrle’s.

In its heyday in the 1960s and ‘70s, the business was more popular as a nightclub than a restaurant. It featured live bands and attracted young adults from across Avoyelles and neighboring parishes.

The building holds a lot of memories for many people.

Laborde said when he was in college, he would bring friends from New Orleans, Lafayette, Shreveport and other areas of the state to Kyrle’s.

“My college friends had heard about Kyrle’s and wanted to go to Mansura to see what it was about,” Laborde added. “They always had a great time. There were great bands, good times and great memories.”

“Back in the day, when the Cypress Room was banging, the club was techno crazy and the Captain’s Lounge was the quiet crowd,” Tuwanna Moreau said on Facebook. “I have seen that place slap full, not another person could stand inside and the parking lot was full of people. I had many, many fun nights there. Lots of memories.”

“Oh my God, memories galore in there. I cut my teeth in there back in the good old days and I wish I could buy it,” Faye Eubanks explained on Facebook.

Rebecca Novo added the place was always special to her because she married her husband, Bruce at Kyrle’s.

“I didn’t work at Kyrle’s but I went there as I was growing up,” Cottonport Mayor Scotty Scott said. “My wife, Becky, and I have been married for 35 years and we will go to Kyrle’s at least once a month.”

The sale would include everything you need to operate goes with it- building, land, furniture, fixtures, equipment, catering trailer, crawfish trailer, vehicle, inventory, etc.