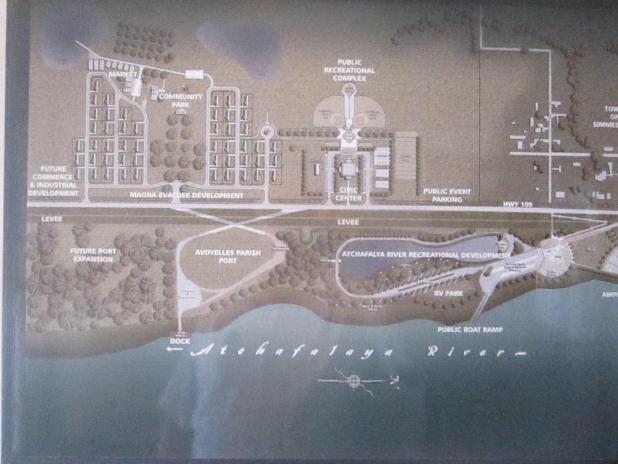 This is one concept of what the Port of Avoyelles could look like in the future. The Port Authority is attempting to attract new tenants for the port and has heard presentations for a proposed oil refinery at the site and a U.S. Army Corps of Engineers plan to deepen the Atchafalaya to improve the port's ability to serve large cargo vessels.

{Editor’s Note: This series looks at several programs and initiatives aimed at improving various aspects of Simmesport’s quality of life.}

It has been promised before and abandoned.

Now, almost a decade later, word that a group of investors wants to build an oil refinery at the Port of Avoyelles in Simmesport is spreading once again.

But is it too good to be true?

Port Commission President Barry Laiche said the talks with Canadaville Corp. -- a group of private investors -- are still in the preliminary stage but have every indication of becoming a reality.

“I had a briefing last week with people involved in the proposal and was presented with a rough site layout of the project,” Laiche said. “They are trying to get everything together for the necessary permits, which can be a time-consuming process.”

Laiche said that industry “would be the biggest thing” in developing the port and Simmesport.

The “Canadaville” group is not affiliated with Magna International -- a Canadian company that built the Hurricane Katrina refugee community it called “Magnaville. The residential area became known as “Canadaville.”

Magna donated the property to the Avoyelles Port when the residential community was closed.

Magna has indicated it had plans to build a 200,000-250,000 barrels-per-day refinery in 2010. The proposed plant would have employed over 600 workers once completed. It would have required a large number of construction workers to build it.

Gov. Bobby Jindal wrote Magna Vice Chairman Dennis Mills in August 2010 expressing his support of the proposal and asking Magna to let him know how the state could assist “in this important matter.”

That project never became a reality.

Despite those past raised and dashed hopes, the 2018 promise of a refinery in Simmesport’s future must be taken seriously, Laiche said.

Efforts are underway to obtain necessary permits, which could take two years or more.

Once the pre-construction hoops have been jumped through, construction could take another two or three years.

The refinery being discussed for the port would hire 1,000 to 1,200 permanent employees.

Simmesport is deemed a good site for a refinery because it is located near the Austin Chalk and Tuscaloosa Marine Shale oil-bearing formations that run from East Texas into Mississippi.

The group favors the Simmesport site because of its access to river and rail transportation and its proximity to oil-producing shale and chalk formations. The presence of the port on the Atchafalaya is another advantage.

It would allow barges to bring in crude oil and sail away with the refined product.

Simmesport is also far enough away from the Gulf of Mexico to be unaffected by hurricanes.

In 2005, the one-two punches from Katrina and Rita knocked out several Gulf Coast refineries, causing gasoline and other commodity prices to increase dramatically.

Laiche said he has also been approached by representatives of the U.S. Army Corps of Engineers asking the Port Commission to support a proposal to deepen the Atchafalaya River from Simmesport to Morgan City.

“This would provide the port true deep-water access to the Atchafalaya,” Laiche said.

The port is deeper than ports on Red River, but is still not deep enough to accommodate ocean-going vessels.

A deeper channel would allow larger vessels to go up and down the river under existing traffic bridges.