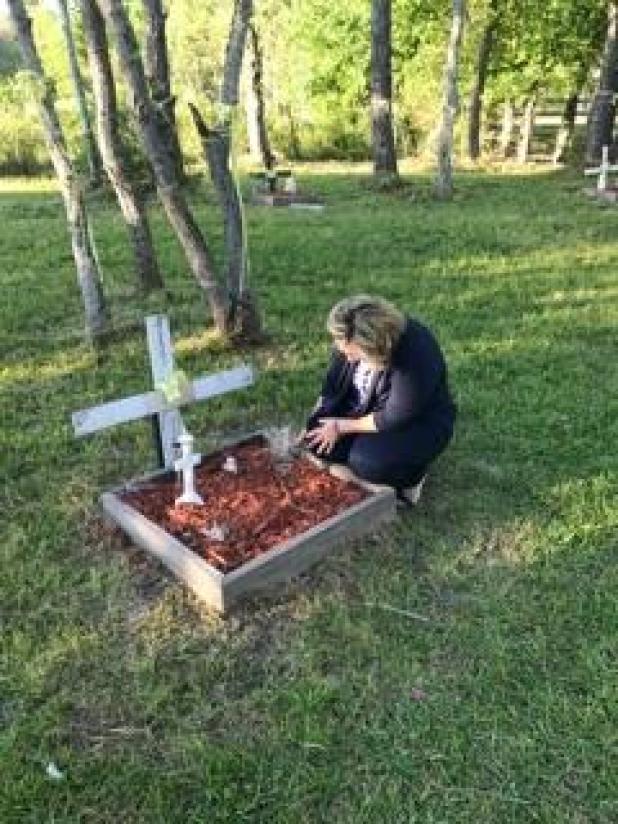 Shera LaPoint reflects at the memorial marker where the body of Donna Gonsoulin Prudhomme was discovered in 1991. LaPoint worked on the team that eventually used DNA to find Prudhomme’s family members. That led to authorities being able to identify Prudhomme, who had been known for the past 28 years as “Janet Doe.” She was honored for her work with an award from the League City (Texas) Police Department. {Photo courtesy of Shera LaPoint}

Everyone loves a good mystery, and “cold case” mysteries are especially compelling.

For almost 28 years, “Janet Doe” was just a nameless victim of what is sometimes called the Calder Road case near the abandoned Calder oilfield in League City, Texas, south of Houston.

Thanks to a dedicated team of law enforcement and forensic genealogists that included Shera LaPoint of Bunkie, “Janet Doe” now has a name and is one step closer to someday having justice for her death.

“We still do not know who killed her, but now we know who she is,” LaPoint said. “Police are still working the case to try to develop leads on what happed to her.”

“Janet Doe” is Donna Marie Gonsoulin Prudhomme of Nassau Bay, Texas, who was 34 when she went missing around July 1, 1991. Her body was found in September 1991

She and three others were buried in shallow graves within 50 yards of each other at different times from 1986-91.

LaPoint is a “genetic genealogist” and owner of Our Roots DNA & Genealogy in Bunkie. She is married to Dr. Paul Lapoint Sr.

She started out with a possible lead to the woman’s identity and ended up as a member of the team seeking to give the victim a name and to let her family finally know what had happened to her.

For her invaluable work on the case, League City police awarded her the “Coin of Excellence for Outstanding Performance.”

“Det. Recie Tisdale, of the League City cold case unit, called me one day,” LaPoint recalled. “He said a check of a family DNA site found my father-in-law was the victim’s third-highest match. He asked if we knew of any missing family members, especially of those living in Texas.”

LaPoint told Tisdale they were unaware of any missing family members, but then told him what she does and volunteered to aid the investigation.

“I’m not one to turn down free help,” Tisdale said. “When she told me what she did, I welcomed her assistance.”

Tisdale said he and a few other cold case detectives worked with LaPoint over several months, putting the pieces of the puzzle together “until we finally identified her.”

Clients include those who were adopted and are searching for their biological parents or who are just interested in knowing their genealogical ancestry.

“I have been very successful in my work,” she said. “I have found over 60 parents of adoptees.”

LaPoint went about doing what she would do if looking for a long-lost relative of a client.

“I isolated three DNA lines and built a family tree down from those,” she said. “I found two lines had family members who had moved to Port Arthur, Texas.”

LaPoint said it was “a team effort.”

Parabon Nano Labs analyzed the DNA and confirmed the victim was of Cajun ancestry.

Family Tree DNA agreed to allow law enforcement to upload Prudhomme’s DNA to their site, where it could be matched against others on that site.

“On Jan. 29, they found an uncle match,” LaPoint said. “I built the uncle’s family tree. I found that his grandparents were already in the tree I had built, so we knew we had the right family line.”

Authorities contacted the uncle’s daughter, who put them in contact with the victim’s sister.

Dianne Gonsoulin-Hastings confirmed her sister Donna had been missing since 1991 and nobody knew what had happened to her.

The press conference came eight days before what would have been her 64th birthday on April 23.

She was known as Donna for 34 years of life and as Janet Doe for almost as long in death.

At a memorial service on April 17, in a church built on the property where the four murdered women were discovered, Gonsoulin-Hastings expressed appreciation for the work done to identify her sister’s remains and bring a measure of closure to the family.

“I'm glad I'm here to see this day because I never thought I would, even though there was a glimpse of hope,” Gonsoulin-Hastings said, as reported by KPRC-TV (Click2Houston) investigative reporter Robert Arnold.

“I've looked for her with detectives and everything, and to find out that she was just right here all this time.”

KPRC reported Gonsoulin-Hastings said the years since her sister’s disappearance were difficult and filled with questions as to why she vanished.

As an example of just how small a world it really is, LaPoint said that after the identification was made public in April “two of the people in my Facebook group ended up knowing her.

“One of them babysat her child when the family lived in Ville Platte in the early 1980s,” Prudhomme said. “Her husband was from Ville Platte.”

Tisdale said the Prudhommes had separated some time before Donna’s murder. He said he believes the ex-husband is deceased.

Prudhomme was the mother of two children when she died in 1991. One of her sons has since died.

“Another woman in my group lived just down the street from her when the family lived in Port Arthur,” she added.

Tisdale said he and the other detectives are still actively working the Prudhomme-Cook case, “trying to identify anyone who knew these women, who can tell us more about their lives at the time of their murders. We have not been very successful finding many people who actually knew them, who knew where they lived and who knew them at work.”

Tisdale said any information is appreciated and could be helpful.

LaPoint admits to being bitten by the detective bug herself. She enjoyed the work and the fact that it was a worthwhile effort that ended in success.

“I would like to help the police in the future,” she said.

She took a forensic DNA course in Houston earlier this year and is enrolled in a genetic genealogy course in college.

“I see this kind of work as being a voice for the victims,” LaPoint said, “and DNA speaks very loudly. Those responsible for these horrific acts need to know that. They will be caught.”