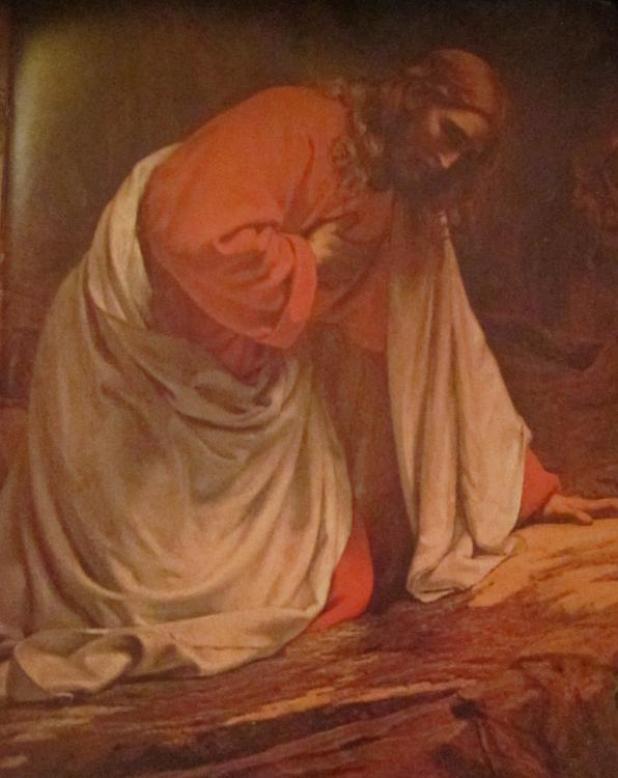 PRIOR TO ARREST IN GETHSEMANE

Jesus of Nazareth seems lost in prayer mere minutes before his arrest in the Gethsemane Garden outside of Jerusalem two days ago. The roaming rabbi was charged with treason and executed on Golgotha -- also called the Place of the Skull or Skull Hill -- yesterday. {Artwork by Henrik Olrik (1830-1890)}.

8 Days in Jerusalem: Day 7 - Jerusalem returning to normal after Passover

{Editor’s Note: This series depicts how the events of Jesus Christ’s last week in Jerusalem could have been reported by a newspaper. It consists of eight articles, beginning with Palm Sunday and ending with Resurrection Sunday. It is based on the accounts found in the New Testament books of Matthew, Mark, Luke and John but also includes historical information not included in the Gospels. This is the seventh article in the series.}

JERUSALEM -- This Passover week has been a tempestuous one, but the city is returning to normal.

The masses that have clogged Jerusalem for this holy season are making their way back to the surrounding communities and provinces.

The excitement over the arrival, teaching, arrest and execution of Jesus of Nazareth has almost died down. The crucified carpenter’s followers have disappeared since his arrest in the Gethsemane garden two nights ago.

Gov. Pontius Pilate has agreed to have Roman soldiers stand guard at the tomb where Jesus’ body was placed. Jewish religious authorities said it was only a precaution to guard against the possibility that Jesus’ followers or others would steal the body to give the impression he had risen from the dead. Such an event could allow them to incite the crowd to rebel against Roman political authority and the priest’s religious authority.

During the past week and on other occasions in the past three years, Jesus had made public comments that some interpret as predictions that he would rise on the third day after his death.

Jesus rode into Jerusalem on the first day of the week with a crowd proclaiming him to be the messiah and spreading palm fronds in his path. He cleared the Temple of merchants and taught in the Temple early in the week. He remained in Bethany a day before returning to Jerusalem for the Passover meal with his followers.

He was arrested by a mob that night, convicted of blasphemy by the Sanhedrin and condemned by Pilate for treason yesterday morning and crucified. He died a few hours before sunset, which began the Jewish Sabbath -- a holy day of rest and worship.

Yesterday’s crowd before Pilate was markedly different from the one at the beginning of the week. This one called for Jesus to be crucified rather than crowned king.

If there is a “resurrection after three days,” it would have to happen sometime before sunset tomorrow to fit the traditional method of counting any part of a day as a “day” and the Jewish manner of beginning and ending a day at sunset, rather than sunrise.

In this case, it would be a few hours yesterday, all Sabbath day today and then that part of tomorrow from today’s sunset until the “resurrection.”