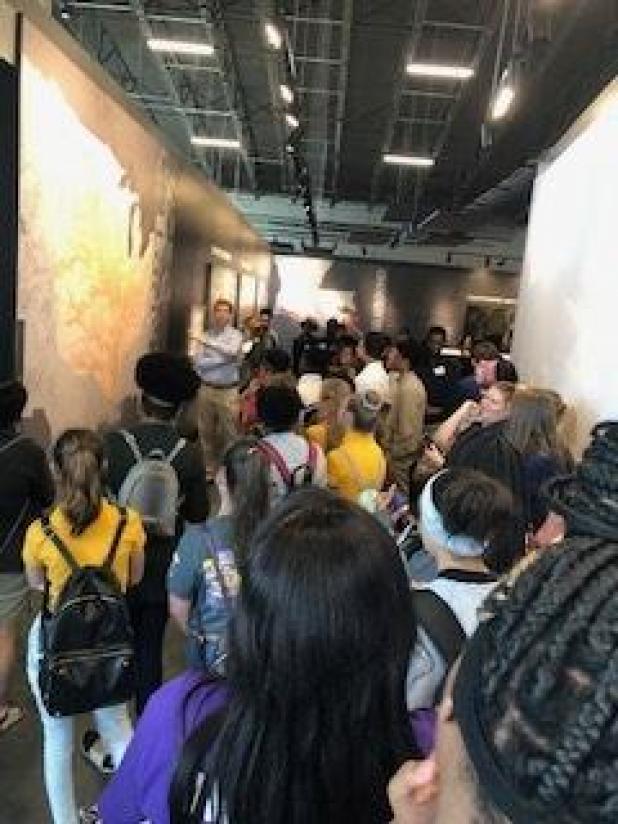 A group of Avoyelles Parish high school students listen to a presentation during a “STEM Day” event solely for them. The day-long event was sponsored by LSU professor Dr. Isiah Warner, a Bunkie native, on May 20 at LSU. {Photo courtesy of Dexter Compton}

“Partners in Education” is more often used in empty rhetoric than seen in action.

A group of successful “native sons” of Avoyelles Parish public schools is well on the way to changing that.

Project 1-Avoyelles is a non-profit organization formed by individuals to work to improve public education in Avoyelles Parish.

Conrad Meyers, a retired Army colonel and a member of Project 1’s board, told the School Board at its June 4 meeting that the group wants “to forge partnerships in the parish” to address the needs of students in the public schools. The group is particularly focused on serving the under-performing students, he said.

“We are seeking to develop clear pathways to educational achievement to support all K-12 students,” Meyers said.

The number of people involved with Project 1-Avoyelles has grown to approximately 500. That counts the board of directors and the three “Local Implementation Teams” -- which Project 1 calls “villages.”

“It takes a village to educate a child,” Meyers noted, citing a familiar quote.

Meyers said the organization and its leaders have already held a few events and have plans for more. Last year it was involved in a robotics camp held at the Bethune Center in Marksville.

It will have another robotics camp this summer to be held in Bunkie. (See page 4 for more on this program.)

The most recent Project 1-related event was sponsored by Bunkie native and LSU professor Dr. Isiah Warner at LSU on May 20. Warner is Project 1’s board chairman.

When Warner was honored by his hometown for being the SEC Professor of the Year in 2016, he promised he would give back to his community with efforts to invest in the parish’s students.

On May 20, he kept that promise by hosting a special “STEM Day” at LSU for 48 students from the Avoyelles Parish School District’s four high schools.

The STEM event came almost exactly two years from when May 17, 2017 was proclaimed “Dr. Isiah Warner Day” in Bunkie.

APSD Secondary Education Supervisor Dexter Compton said the students enjoyed the special attention and the STEM-related activities.
He said it is important for students to have a good grounding in math, science and technology since many jobs in the modern workforce require skills in those areas.

The full day of STEM-related events included opportunities to conduct experiments, tour the recently constructed River Center, interact with college students in the STEM courses and explore the many careers in that field.

Warner not only had his staff plan, organize and conduct the event, he actively engaged with the students throughout the day, despite his demanding schedule.

The organization is sponsoring a robotics camp this coming Monday-Friday (July 22-26) at Bunkie Magnet High School for approximately 24 youth who will be in grades 7-9 in the 2019-20 school year. Classes will be held from 1-4 p.m. daily. Lunch will be provided. There is no registration fee. There will be a special ceremony after the Friday session in which certificates will be awarded to participants.

Meyers said the challenges Project 1 has established for itself and the school district is to “improve the overall ‘C’ rating, to have no failing schools and to address the needs of the under-performing students.”

If the public school system can achieve that, it will mean a better-equipped labor force which will create more skilled jobs paying higher wages raise the overall prosperity of the parish, Meyers said.

He said Project 1’s “pathways” will decrease drop-outs, increase the graduation rate, and result in an increase in district graduates who go on to post-secondary education institutes -- college and trade school.