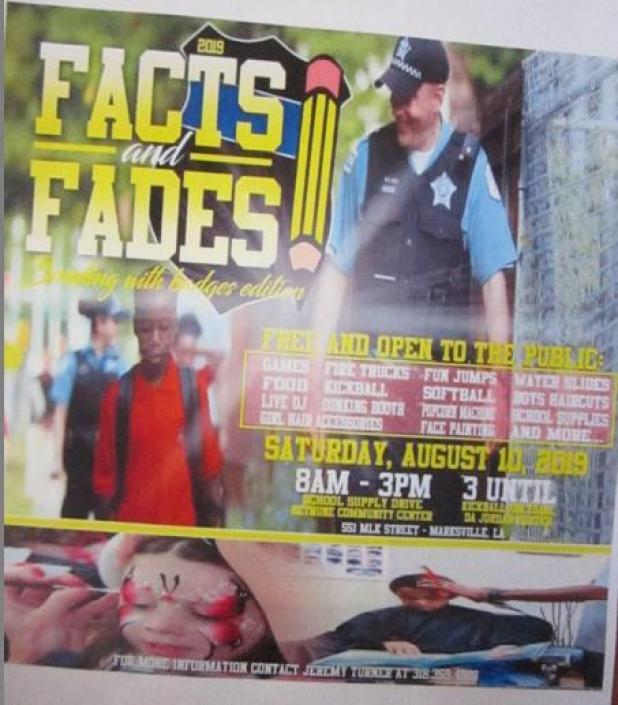 At some point, most little boys want to be a policeman when they grow up. Somewhere along the line, that attitude often changes and the relationship between kids and cops becomes more strained.

Marksville P.D. Sgt. Laken Rico and Patrolman Damon Didier decided they wanted to do something to correct that strained relationship and let children and teens see law enforcement officers as ordinary people rather than an authority figure.

Their “Facts and Fades: Bonding With Badges Edition” will be held Saturday (Aug. 10) at the City of Marksville’s Mary Bethune and D.A. Jordan centers at 551 Martin Luther King Street.

“We will have barbers there to give free haircuts to the boys,” Rico said. “That’s the ‘fades’ part. Officers will also talk to the children about being a police officer and what it means to be a good citizen. That’s the ‘facts’ part.”

Rico said about 15 MPD officers will be onhand for the event. All will be wearing T-shirts and ordinary clothes. Many will have their families with them.

The purpose behind “Facts and Fades” is to show young citizens -- and older citizens as well -- that police are human beings with human feelings and not law-enforcing, unfeeling robots.

The event is free and will include a water slide, Jupiter jump, dunking booth, hotdogs, soft drinks, face painting, popsicles, a live DJ and gift bags for boys and girls.

“We have purchased school supplies for 500 children,” Rico said.

Most of the activities will be done at the Bethune Center from 8 a.m. to 3 p.m.

After 3 p.m., the fun and fellowship continues at the nearby Jordan Center where police officers will play kickball and softball with the youth.