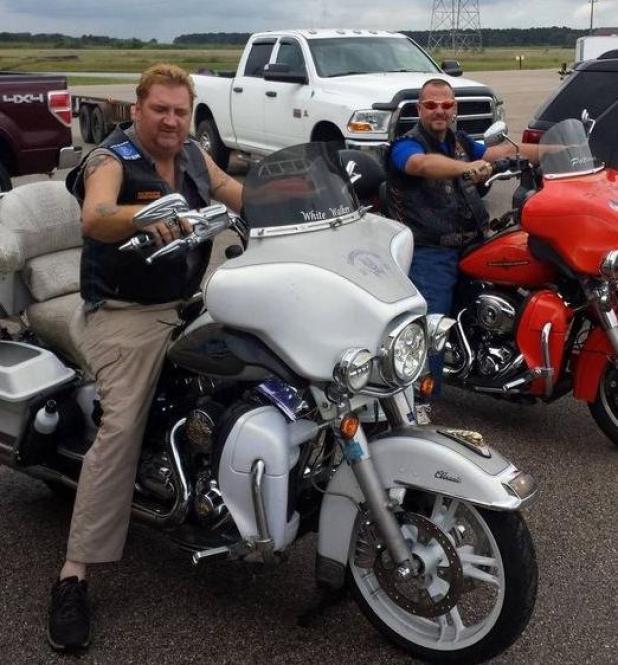 What started out as a joke became a mission to aid victims of domestic abuse and resulted in two Central Louisiana law enforcement officers setting a world record for no-hands motorcycle distance on a closed track.

Shelton Foster and Mike Wall both live in Dry Prong and work at the federal prison in Pollock. Foster may be a familiar sight in Avoyelles, as he spends a lot of time here visiting family and friends and riding his Harley on parish roads.

On May 9 the two men both rode their Harley-Davidson Electra Glide bikes 185.25 miles without hands on the MSR Speedway track in Angleton, Texas. On Oct. 26, they officially displaced Italian cyclist Marcello Sarandrea as the Guinness World Records holder when the publication certified the May 9 feat.
Sarandrea rode his Yamaha Tricker 250 “senza mani” (no hands) for 137.94 miles in Rome in 2015.

Sarandrea has already contacted Foster and Wall seeking a challenge match to regain the no-hands title.

Foster said a New Orleans cycle shop has indicated a willingness to sponsor the event if all necessary arrangements can be worked out.

AVOYELLES LINKS
Although Foster lives and works in Grant Parish, he has several links to Avoyelles.

His uncle and aunt, Calvin and Trish Foster, live in Moreauville.

Many of Foster’s current and former co-workers at the federal prison in Pollock are from Avoyelles.

“We have several club members in Avoyelles Parish and this was done on their behalf as much as it was for us,” he said.

The Reguladores is a law enforcement motorcycle club with several Avoyelles members in the local chapter. The nationwide club held its national convention in Marksville this past year.

“I’m very proud of Shelton for this world record and for all of his accomplishments in life,” his Uncle Calvin said. “He was in the service, got out and went into law enforcement and is now at the federal prison. I’m very proud of him.”

Calvin said he and Shelton are still very close, even though Calvin prefers horses to Harleys.

“I went to their motorcycle club convention in Marksville and was a VIP, thanks to Shelton,” Calvin said. “I was probably the only cowboy walking around all those motorcycle guys.”

Even as a child, Shelton did not share his uncle’s love of rodeo.

The main reason for the record-breaking effort was to support the Domestic Abuse Resistance Team (DART), raise awareness of the domestic abuse problem in this area and to fight against domestic abuse.

“DART’s shelter is in Ruston,” White said. “If people don’t want to go that far, DART will look for other shelters across the state.”

Domestic abuse victims in Avoyelles should call Faith House at 500-0861 to speak with an advocate in that agency.

“We started this as a joke,” Foster said. “Mike was pulled over in Creola for riding his bike with no hands. The officer knew Mike and let him go with a warning not to be riding with no hands in Creola.”

Foster said he and Wall “googled” to see if there was a law against operating a motorcycle with no hands. That’s when they saw a story about the world record being broken by the Italian biker.

“The next day I got on the internet and put in my application with Guinness to try for the world record,” Foster said. “They accepted the application.”

Foster said he and Wall work with DART and know how important the organization’s work is.

“We were talking about what we would have to go through to break a world record,” Foster said. “There’s the obstacles to overcome, the hard work to achieve the result. Then there’s the risk of being called a liar, of people not believing you when you tell them what happened.

“That’s when we realized that those are the same things a victim of domestic abuse has to go through,” Foster noted.

Thanks to sponsors, the effort raised $8,000 in donations and a lot of publicity for the fight against domestic abuse.

There is another world record claimant, but he is not recognized by Guinness.

Phil Comar of Adrian, Mich., traveled 588 miles without touching the handlebars this past October.

Foster said Comar -- who rides to raise money for Parkinson’s Disease research -- achieved his feat on a specially modified bike and on the open road. Foster and Wall had to claim the Guinness record on an enclosed track riding an unmodified bike.

“The Electra Glide has a cruise control, like a car, so we set it for 30 mph -- which was the fastest we could go and still take the 30-degree turns at the speedway,” Foster said.

Foster said he and Wall are planning to hold an event with Comar in the future.

“We hope to ride escort in his next attempt to set a new record,” Foster said. “We have the greatest of respect for Phil. He has done great work in raising awareness and funds to combat Parkinson’s Disease.”

The duo’s first attempt to break the Guinness-sanctioned record was in October 2016. That ended on a rain-slickened track after less than one lap when Foster lost control of the Harley.

After nursing a case of road rash and making some repairs to the bike, he and Wall tried again on May 9.

This time, Mother Nature cooperated and the two rode into the record book.

They entitled their effort “Jesus, Take the Wheel.”

“Coming back from breaking the record, a lady ran a red light right in front of me in Alexandria,” Foster recalled. “I T-boned her going 40 mph and flew 30 feet through the air.

“I had both hands on the handles, going the speed limit and doing everything right,” Foster continued, “and then this happened. You would think I’d get hurt when I was doing the crazy stuff.

“Jesus was definitely holding the wheel for me in that accident,” he said. “I was lucky to not have received more serious injuries.”

He was in the hospital for three days with two cracked vertebrae in his back, a fractured pelvis and a concussion. He is still recuperating from his injuries. The motorcycle was totaled.

Given the fact that his first attempt resulted in a case of road rash and he ended up in the hospital after the second effort to break the record, Foster was asked if he might just let any new record-breaker keep the title.