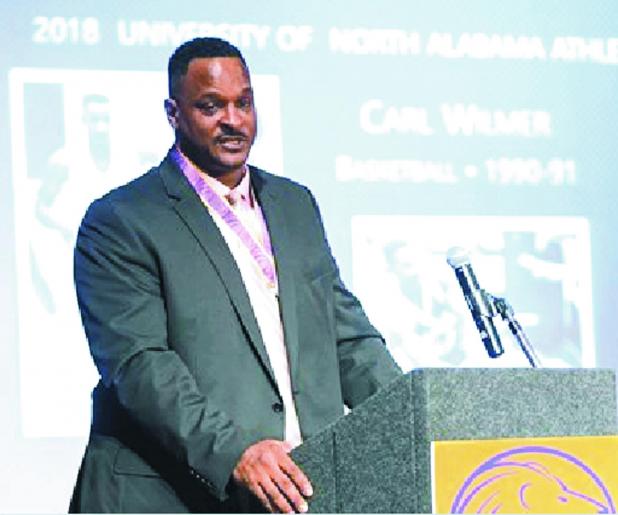 Carl Wilmer speaks at his induction into the University of North Alabama’s Athletic Hall of Fame on Oct. 13. {Photo by UNA}

In 1990, Carl Wilmer was sinking baskets and earning a degree at the University of North Alabama in Florence, Alabama. That same year, UNA established its Athletic Hall of Fame to honor its standout student athletes.

This year that young star hoopster is a middle-aged man who was honored by his alma mater with induction into the Lions’ Hall of Fame.

Wilmer, a Marksville native who still lives in the Hickory Hill community, and three other UNA athletes joined 130 Lion standouts from years past on Oct. 13.

“I never imagined myself in the position of being considered for the Hall of Fame,” Wilmer said. “It is an honor I will cherish the rest of my life. It is truly a blessing and made me realize how good God is.”

Wilmer currently works for Hexion Specialty Chemical in Alexandria. He coached at Holy Ghost and at Marksville High. He also worked as an administrative host at Paragon Casino Resort.

“It was Coach Alford who came to me in my freshman year and taught me how to play defense,” Wilmer continued. “That is when I began loving this game of basketball.”

He averaged 15.3 points per game on a team that went 29-4. His 57.4 percent accuracy rate for goals was the highest on the team and he was the Lions’ second leading scorer.

Wilmer said the key to the Lions’ success in 1991 was unselfish teamwork.

“All of us were stars on other teams, but we quickly realized there was only one basketball and we had to share it,” he said. “We just fed whoever had the hot hand. We had a bunch of great players, so teams were not able to key on one person if we played together. Nobody cared who scored the most points or got the most rebounds. We just wanted to win.”

The degree he was pursuing while also chasing basketballs was in Criminal Justice.