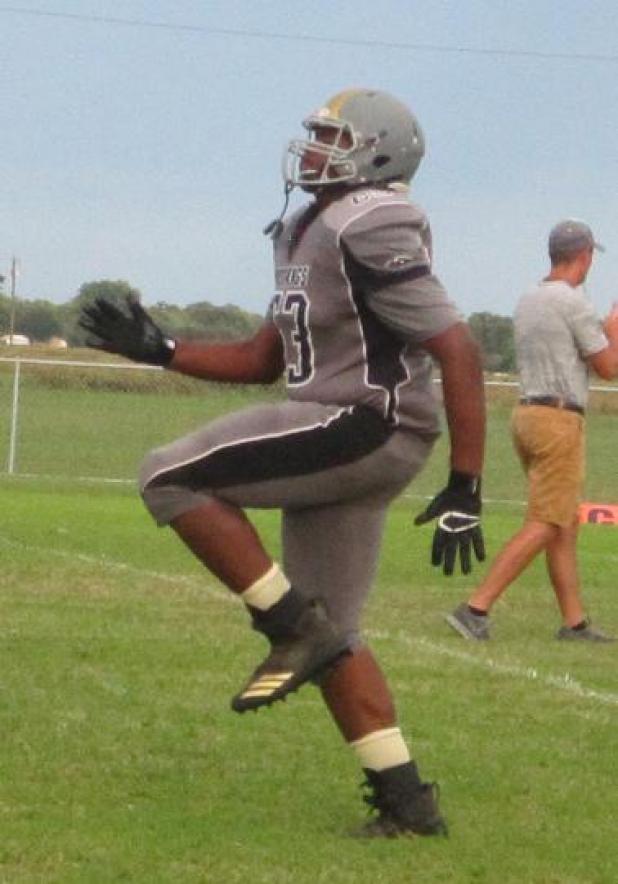 Robert Lewis (right, in pre-game warm-ups) was an imposing force on the Avoyelles Mustangs' offensive and defensive lines during his high school football career. The 6-6, 295-pound senior plans to go to college and hopes football can still be a part of his life at that level. {Photo by Raymond L. Daye} 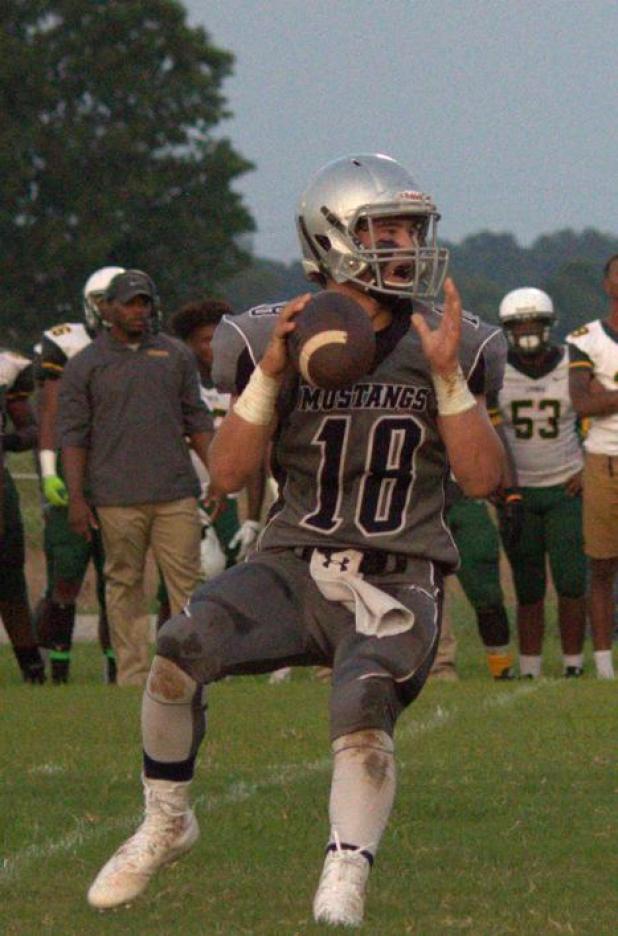 Brody Knott (shown passing as quarterback last year) enjoyed playing a number of positions, including a marauding linebacker that tackled opposing quarterbacks and running backs for losses on many occasions. The 5-8 senior started as the Mustang signal caller when he was a 5-6 8th grader. He spent most of his time on offense this year at halfback. {Photo by Connie Giovanetti} 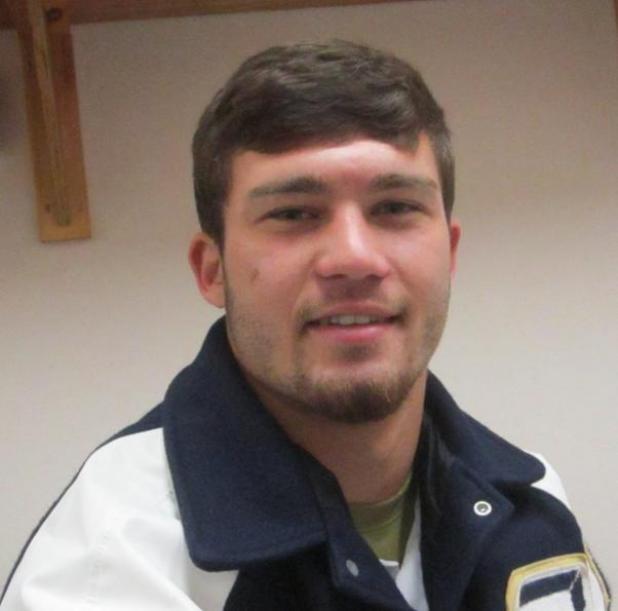 Brody Knott: “I was pretty much always the smallest one on the field, but I didn’t think about that when I was blocking or on defense. I just hit them and whatever happened after that just happened.” 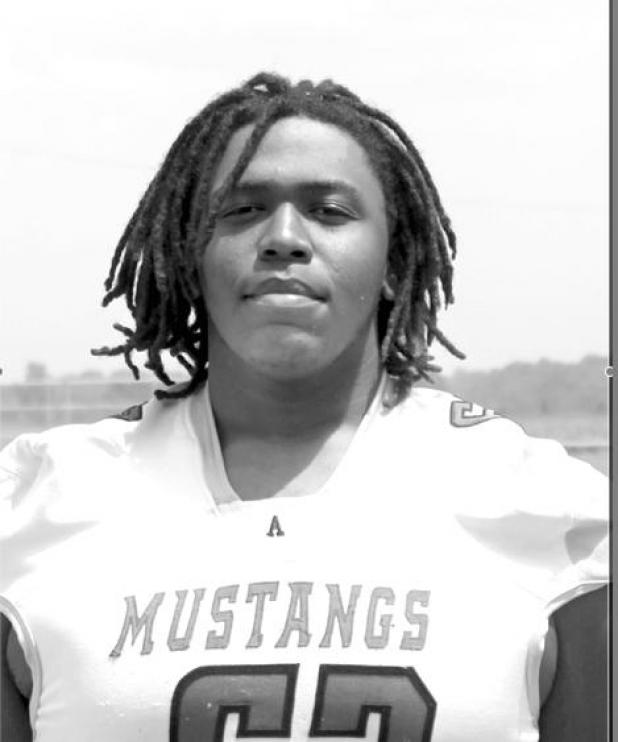 Robert Lewis: “I’m not worried about who gets the headlines and the credit. I’m just worried about protecting my quarterback and making a hole for the running back.”

Brody Knott and Robert Lewis are seniors and veterans of the “Mustang Wars” of the past few years. They love the game, their team and their coach.

After that, the similarities cease.

Knott is a 5-8, 175-pound bantam rooster who has never let his size -- or that of the opponent on the opposite side -- be a factor in how he plays the game.

Robert Lewis is a 6-6, 295-pound “gentle giant” who enjoys being a bulldozer clearing a path to the end zone or a wall protecting his quarterback on offense and a devastating force on defense.

“Brody would joke with me and tell me to get lower on the line because he couldn’t see over me,” Lewis said with a laugh. “He would also come up to me and tell me, ‘I don’t care how big you are, I can still take you down.’”

“Brody is a good leader, a coach on the field,” he said. “He always played bigger than he was.”

About the “big guy,” Boone said, “Robert is a hard worker. He has God-given tools to play football and has used them well. He is very respectful and enjoyable to coach. He always gave you everything he had.”

Boone said he believes Lewis has the ability to play college football if given the opportunity.

Knott is 18, lives in Dupont and is the son of Johnny and Michelle Knott.

His plans for the future are to attend South Louisiana Community College in Opelousas to become a diesel mechanic.

Knott played junior high ball in 7th grade but was moved to the varsity team in 8th grade to become the Mustangs’ starting quarterback -- a position he held until being moved to running back this year.

He also played linebacker on defense.

Although most still think of him as the “too-short quarterback,” Knott said he enjoyed playing on defense more than he did his offensive duties.

“I really love defense, but I loved it all,” he said.

“As a quarterback, you have to be calm, cool and collected,” he said.

He noted a running back doesn’t have to be as collected and linebackers are at their best when they can just let go and pursue the opponent.

Knott said it was different this year, being the ball carrier instead of the signal caller.

“I had to learn to trust someone else,” Knott said. “I never doubted them. I always encouraged them and told them, ‘I know you can do it. What can I do to help?’”

Not surprisingly, his most memorable game was the 2017 victory over arch-rival Marksville Tigers.

“That was a big accomplishment,” Knott said.

“I remember Myron (Robertson) came up to me in the huddle and said, ‘Just throw it up. I’ll go get it.’”

Knott threw the pass and Robertson caught it and carried the ball into the end zone to end a 21-year losing streak against the Tigers.

One of the lasting memories he will have of his days as a Mustang “was having Coach believe in me.

“My first season, I had a lot of doubters because I was so young and so small,” he continued. “I only weighed 150 pounds.”

Knott was probably only 5’6” that year.

“I was pretty much always the smallest one on the field,” he said with a smile, “but I didn’t think about that when I was blocking or on defense. I just hit them and whatever happened after that just happened.”

Knott received the team’s “Bad To The Bone” Award his first year in recognition of his courage and tenacity on the field.

“Something I enjoy most about my time with the team is having Coach believe in me at the start of my playing for him and at the end this year,” Knott said. “You don’t often see a coach who will believe in a super-short kid in 8th grade and tell him, ‘You’re my quarterback.’”

Knott received honorable mention all-district honors in 9th and 10th grade and was 2nd team all-district “flex” player last year and this. The “flex” award goes to a two-way player.

Lewis is 18, lives in Mansura and is the son of Robert Lewis III and Cora Lewis.

Lewis also played junior high ball. He joined the varsity team as a freshman and became a starter as a sophomore.

As an offensive lineman he was part of a wall whose job it was to allow the running backs to gain at least three yards to allow the Mustangs’ four-down offense to continue marching down the field.

Lewis, like Knott, said he prefers playing defense, but also loves playing any position that can help his team.

“I enjoy football because the team is like a special brotherhood,” Lewis said.

Lewis said he wants to go to college because he wants to someday own his own construction company.

He would like football to be part of his college plan, and said there have been some colleges “who are looking at me.”

He has been named to the 2nd team All-District and 1st team All-Cenla teams during his high school career.

Thinking back on the past few seasons, he said his worst memory is having to have surgery on his left ankle last year and sit out several games, including the Marksville game.

Although he was unable to play in that game, he was on the sideline and counts that victory as one of his favorite memories as a Mustang.

Other memories that bring a smile to his face are recalling the impressive and decisive hits he made on offense and defense.

“I think back on making blocks that scored touchdowns,” he said. “That’s what it’s all about.”

Lewis is modest and does not seek attention. He had to think awhile before agreeing to be featured in the newspaper.

Of course, when you are 6 to 8 inches taller than most other people around you, you don’t have to seek attention to get it.

He is not jealous that a quarterback or running back gets the glory and the credit for a touchdown run or scoring pass that would never have happened had he not flattened the opposition and neutralized a threat.

“I’m not worried about who gets the headlines and the credit,” Lewis said. “I’m just worried about protecting my quarterback and making a hole for the running back.”

Lewis closed his portion of the interview by saying he owes a lot to his coach “who always believed in me, taught me how to play, and for all he’s done to help me through hard times during these past years.”

So there you have the “long and the short” of Mustang football over the past few years.

Both young men have made their mark in a football program known for its unorthodox approach to the game. Their team has come close to winning a district title, but fell short.

Their positions on the field will be filled -- you can’t play football with nine players -- but will it be the same?

There’s a 6’5”, 275-pound freshman who has been groomed for Lewis’ place but “he still has a few kinks to work out before next year,” Lewis said.

On a team that runs the ball 90 percent of the time, there will no doubt be someone to fill the running back position Knott vacates this year and the QB spot he held for the previous four.

A big question will be whether there is someone who can provide the leadership the “super-short” Mustang did during his five years in the gray uniform of Avoyelles High.

Boone has said there are some very good players coming up from junior varsity. That gives him reason to be optimistic about the football program’s next few seasons.