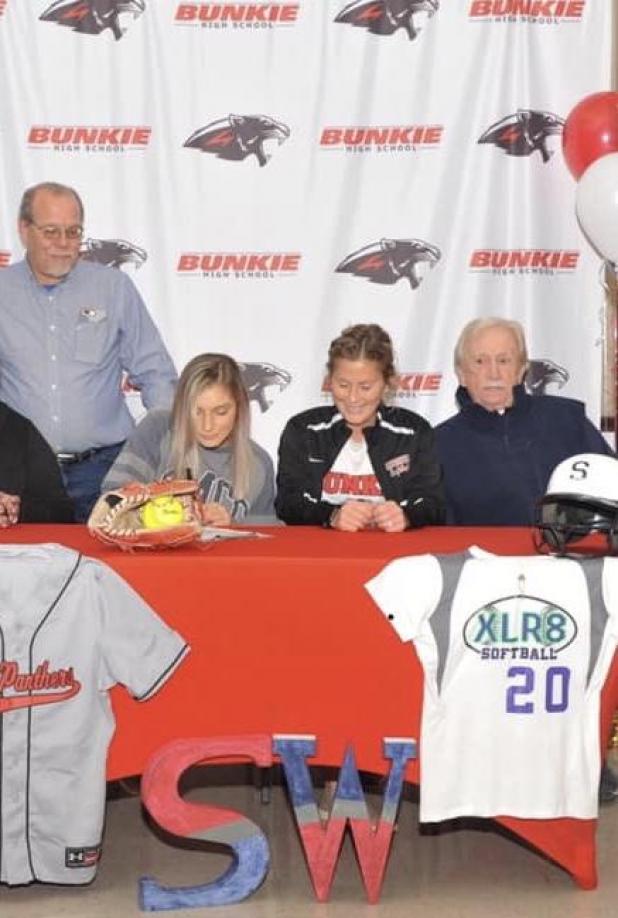 Jensen Gremillion of Dupont, a softball star for the Bunkie Magnet High Lady Panthers softball team, will continue her efforts on the diamond at Southwest Mississippi Community College next year.

Gremillion has received a scholarship as a pitcher and utility player for the Lady Bears. She signed with the school in formal ceremonies last Friday (Nov. 1).

She is the first Avoyelles Parish public school softball player to sign with a college team since Bunkie’s Elizabeth Link in 2015.

“I’m ecstatic to move away and go play softball, because it’s what I’ve always wanted to do,” Gremillion said. “I’m just really excited about this journey and I’m excited to see what the future holds for me.”

She is the daughter of Darlene and Woody Gremillion of Dupont.

Bunkie softball Coach Katelyn Hines Hillman knows firsthand what her star hurler is experiencing. Hillman signed a softball scholarship to play college ball when she was a senior at Bunkie High eight years ago.

“I definitely could not have asked for a better ball player in Jensen and everything that she brought to this team,” Hillman said. “She has the heart, dedication and the drive. That’s something you can’t put into them. They have to have that and want that themselves.”

Gremillion came to Bunkie High from Avoyelles High as a sophomore. She could not play that year, but continued to work on her skills to be ready for her junior year.

“Jensen did not do this alone,” Darlene Gremillion said of her daughter. “She had a coach who believed in her and a wonderful team who backed her up like a family.”

Gremillion’s father taught her how to pitch. She also received private pitching lessons in elementary school to hone her skill.

“She has been with the same pitching coach, Lannie Zeringue, ever since,” Darlene Gremillion said.

Gremillion was recently named to the Louisiana All-State softball team, was a 2019 first team 4-AA All District pitcher and received numerous other awards.

“I’m so excited to be accomplishing all these things with my teammates,” Gremillion said. “They are my favorite people in the world and I couldn’t have done it without them.”