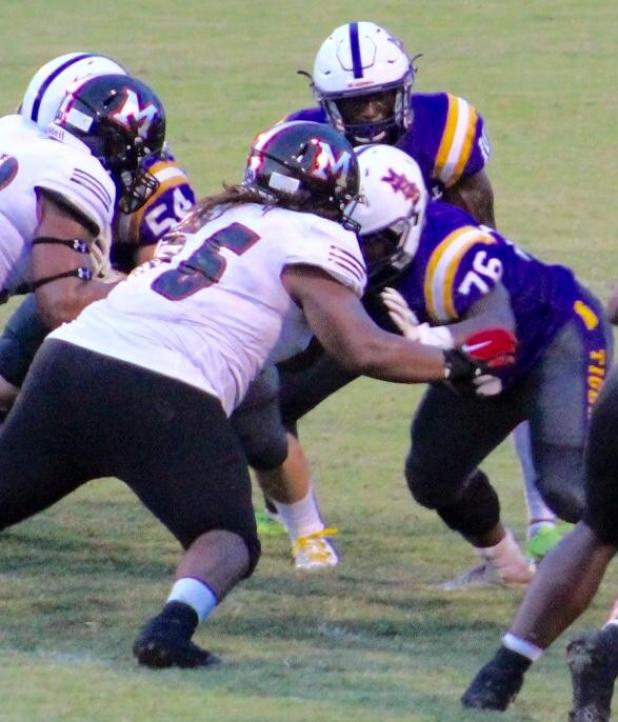 Leonard Sampson (76) squares off against an opposing defensive lineman. Sampson is an Academic All-State and earned first team selection to both the All-District and All-Parish squads. Sampson said he enjoyed facing larger opponents, using his speed and strength to neutralize the opponent's size advantage. {Photo courtesy of Golda Sampson} 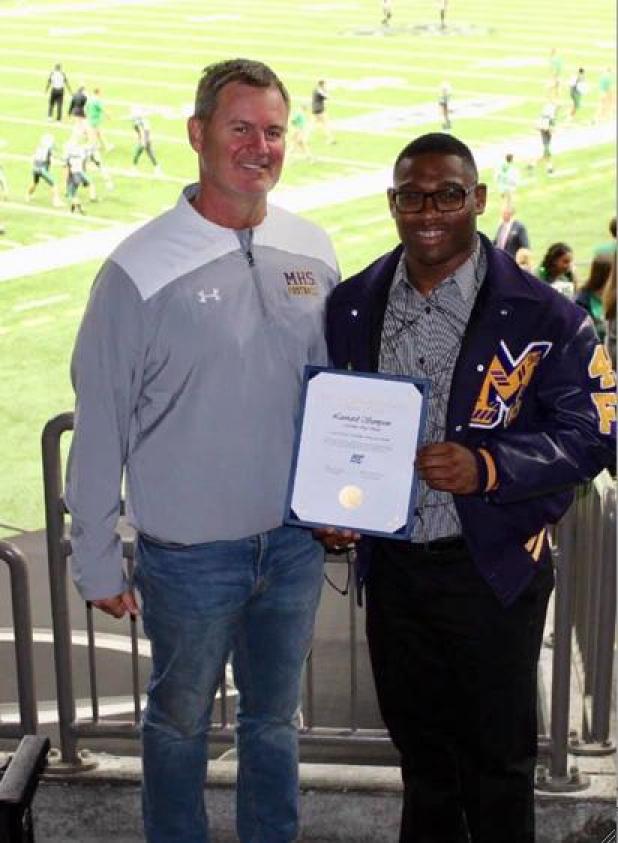 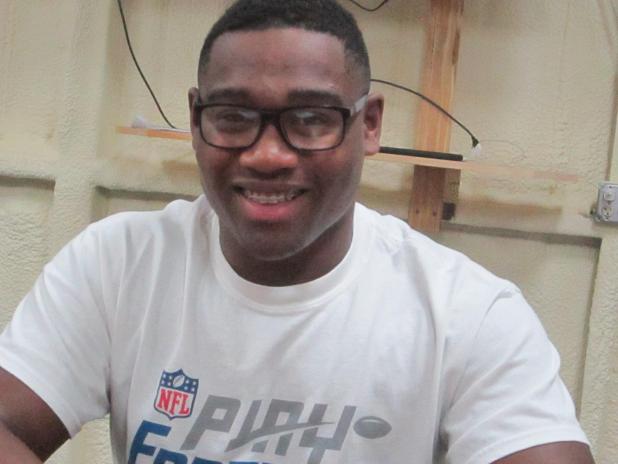 Once upon a time he was the target of bullies. He struggled with asthma. He was shy and withdrawn.

Oh, and only a suicidal idiot would even think about bullying the young man some jokingly say should just go ahead and drop the “p” out of the middle of that last name.

“People say, ‘Wow. You’re an athlete and you maintain your grades,’” Sampson said. “It’s hard, but it is possible. It’s a lot of work.

“After a hard practice, when you get home you just want to eat, shower and go to sleep. You have to make that extra effort and hit the books.”

Coach J.T. Dunbar was with Sampson at the Superdome on Dec. 7 when he received his LHSAA Composite Academic All-State award.

“It’s certainly never easy to be a student athlete,” Dunbar said. “It takes a lot of discipline and focus to be great at either one. It takes a special kind of talent and effort to be great at both.”

Sampson earned the designation with a 4.0 unweighted (“An A is an A”) grade point average for his four years in high school. Because he took honors classes -- which are more rigorous -- his “weighted” GPA is 4.56.

Sampson plans to go to the University of Louisiana-Lafayette in the fall, but he hopes to make it on his academics and not athletics.

He plans to pursue a degree in computer engineering, but will probably try out for the football team if he is not offered a scholarship. However, he thinks his best shot at an athletic scholarship is in powerlifting -- which he probably enjoys more than football.

“I decided to try out for football because friends told me I should,” Sampson said. “I was bullied a lot when I was younger. All through elementary and 7th grade.

“I was still bullied in 8th grade, but it slacked off after I started working out in 9th grade,” he added with a smile.

Dunbar calls Sampson “a great young man, a man of high character. He came to us with asthma and never having played football before.

“He had raw talent but he had never been pushed,” Dunbar continued. “He became a good player, but the main thing is that he was always a quality young man and a good student.”

Looking back on his high school football career, Sampson said there were several special moments.

One was his first year on the team when the Tigers reached the quarter finals of the state playoffs. Another was running for over 30 yards on a play as a fullback.

What he enjoyed most as an offensive lineman “was going up against someone who was big and fat and knowing how to move them aside so the running back could get through.”

He said he learned to use his speed and upper body strength to counter the size of larger defenders.

At 5-9, 205 pounds, Sampson had plenty of opportunities to go against bigger opponents.

He played linebacker on defense, and enjoyed the adrenaline rush of pursuing an opponent.

But it was on the offensive line, “in the trenches” where the success of both teams is determined, where Sampson found his home.

“It gets really nasty in there,” he said with a laugh, “but I realized how much fun football can be.”

The linemen on both sides of the ball are the only ones who hit and are hit on every snap. Sampson was never injured in a game. However, in a recent practice he pulled something in his wrist that has resulted in putting it in a brace.

Sampson said he always tried to keep the team’s spirits up, offering encouragement in bad times and congratulations in good times.

Football “helped me get a spring in my life. It taught me a lot of things, including how to interact with people.”

“They called my Mom the team’s cheerleader because of how loud she cheered for us,” Sampson said. “They’d come up to me and say, ‘Your Mom’s here.’ I’d say, ‘I know’ because I could hear her.”

Sampson said he considers Dunbar “to be like another father to me. I was a shy little kid and it was him giving out all that energy, speaking so wisely, that made me realize I had to change and taught me what I could do if just gave anything I did my all.”

Football is a “memorable experience and it is heart-breaking when you have to step away from it,” Sampson said, reflecting on the possibility that he might have played his last football game.

“You put on the pads and walk out on the field, going to war with your brother walking next to you. You can never get that feeling again.

“You can play basketball in your backyard and play baseball just about anytime,” he continued. “You can play golf at any age. But football is different.

“When you are done, it’s gone forever.”