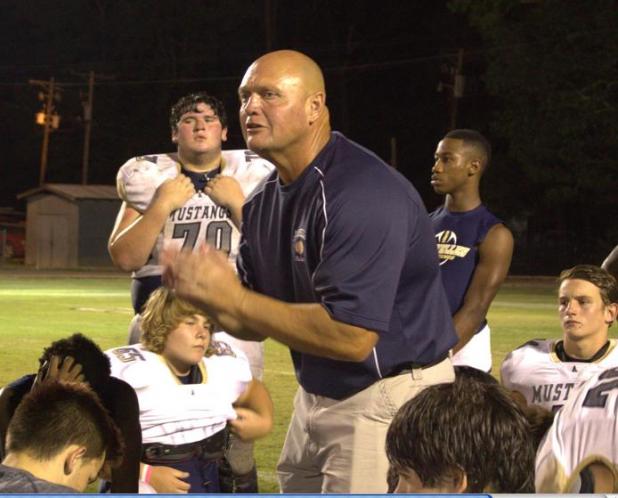 Avoyelles Head Coach Andy Boone conducts a post-game team huddle after the Mustangs’ loss in Jena last season. Scenes like this will make Friday nights special for high school football fans as the 2018 season kicks off this Friday. {Photo by Connie Giovanetti}

Mustangs will ‘play their game’ again this year

{This week's edition of the Marksville Weekly News and Bunkie Record includes our annual high school football preview, which contains more articles as well as team and individual athletes' photos.}

Coach Andy Boone has made his local reputation on the high school gridiron by keeping his Avoyelles High Mustangs “competitive” in games even when they are clearly outmanned, out-gunned and -- to put it bluntly -- out-classed for the past nine years.

If you thought year 10 would be different, think again. “We will have more consistency and will definitely score more points,” Boone said. “We have made several changes that will improve us. We are certainly better than we were last year.”

The Mustangs “will play their game,” Boone said, adding that should give opponents more than enough to handle.

Last year the Mustangs beat arch-rival Marksville High for the first time in over two decades. That stands as a highlight of last season. Another highlight is tying for 2nd place in the district.

“I believe we will win district this year,” Boone predicted. “It will be hard because both Marksville and Jena are tough, but I believe we have the talent to get the job done.”

Boone’s version of America’s pastime (sorry, baseball fans), is called “‘Stangball” in these parts. It is a four-down offense, no matter what. No punts, no field goals, no PAT kicks. There is no “foot” in Avoyelles’ version of football.

Even on the kickoff the ball usually travels only 10-15 yards as the Mustangs try to recover an onside kick so they can go back to their “2.5-yards-and-a-cloud-of-dust” offense.

An onside kick is an infuriating maneuver that allows the kicking team to retain the ball if it recovers the oblong sphere after it has gone 10 yards or touched an opposing player. The gambit has its drawbacks. If the other team recovers the short kick, they only have a half-field to cover.

The ‘Stangs use a full-house backfield -- quarterback, fullback and two halfbacks.

Five-year starter Brody Knott returns to the backfield, but not in his familiar role as the Mustangs’ quarterback -- a position he has owned since he was an 8th grader.

Although he would pass a little more each year, he was known more for throwing blocks than bombs on offense and for hitting opposing running backs as a linebacker than hitting open receivers as the QB.

“We are moving Brody to running back because he is a really good running back,” Boone said. “We are moving John Mose to quarterback. He is faster and taller. He will actually be able to see the receivers over the linemen.” Brody, at 5-8 and 180 pounds, was often the shortest man on the field.

Mose, a 5-11 senior, played defensive back in past seasons.

Boone didn’t say so, but having Knott at halfback leaves open the possibility of a halfback option pass on any down.

“We will probably run 99 percent of the time,” Boone said. “We have the ability to pass, but that doesn’t mean we have to pass. The other team just has to be aware that we can.”

Another player changing positions this year is junior offensive lineman Domingo Cooper, who will be the Mustangs’ fullback.

Avoyelles’ time-consuming, ball-hogging gameplan has made the Mustangs the team other teams love to hate.

It isn’t easy to keep a talented running back -- and Avoyelles has three or four -- from gaining 2.5 yards.

It is frustrating to watch the other team play offense for two-thirds of the game -- more if the ball bounces the ‘Stangs’ way on the kickoffs.

‘THIN' AT RUNNING BACK

“Offensively we are thin at running back,” Boone said. “We have some young players on the bench.

As many pro running backs have noted, without the offensive line they would have spent their careers on their backs in the backfield instead of dancing in the end zone. Boone is a big believer in a strong offensive line.

“Robert Lewis is returning at right tackle, Jacob Landry is at right guard and Antonio Edwards is at right tight end,” Boone said. “They are all seniors and each one is exceptionally strong. We are very tough on our right.” To the left there is less experience, but not necessarily less talent.

Case Riviere is a sophomore center. Chance Lemoine at left guard and Donnie Deshotel at left tackle are also sophomores.

Garrett Clark, a junior, brings a little age to the left tight end position. Boone said the goal is to keep his defense off the field as much as possible. That sounds like a knock on the “D,” but it isn’t meant to be.

In fact, Avoyelles’ defense has been up to the task in most of their contests.

Six of the offensive starters will also be starting on defense -- a problem caused by too few young men signing up for the team. The number of players on the Mustangs’ opponents’ sideline is often double that on Avoyelles’. Boone said the Mustang defense will once again be called upon to stop their opponents, possibly deep on Avoyelles’ side of the field, but he is confident in their ability and determination to do the job.

Most would say the Mustangs’ games are fun to watch. Others would say it’s like watching a NASCAR event just in case there’s a wreck or watching the hockey game for the fights.

The game is interesting because it is unpredictable. Will it be an 8-6 defensive battle where neither team’s offense could get on track or will it be an 80-20 thrashing? And will the Mustangs be the “thrasher” or the “thrashee?”

You can really never know what to expect in a ‘Stangball game -- slugfest, scorefest or snoozefest.

When the Mustang isn’t firing on all cylinders, Avoyelles can find itself on the embarrassing end of a one-sided “whuppin’.” However, if AHS follows its gameplan to perfection, the opponent’s quarterback may be wondering what a football looks like, since it has been so long since he held one.

In the past, the Mustangs have often done a better job of stopping their offense than their opponents’ defense has done. The most frustrating breakdown for Boone is the “dry well,” where everything clicks for 10 minutes and falls apart 10 yards from the goal line. No field goal kicker, remember? It’s all or nothing.

When the opponent covers the length of the field in the remaining two minutes of the quarter it is even more demoralizing for the Mustangs’ players, fans and coaches.

“We have a lot of seniors out there,” Boone said. “There are 10 seniors and each one will be starting somewhere. You would think the experience would cut down on those mistakes, but you never know.”

This year’s season opener is on the road against the Livonia Wildcats on Aug. 31. Boone hopes to return the favor of giving the home team a season-opening loss. The ‘Cats beat the ‘Stangs 16-6 last year in Moreauville.

The Mustangs host the Bunkie Panthers on Sept. 7 in an important non-district rivalry. Bunkie gave Avoyelles more of a game than Boone had expected last year as the Mustangs held on to take a 30-21 win.

The other non-district games are Menard Eagles on Sept. 14 and Welsh Greyhounds on Sept. 21, both on the road, and Northside (Lafayette) Vikings at home on Sept. 28.

The District 3-AAA schedule begins with the Jena Giants at Mustang Stadium on Oct. 5, Avoyelles visiting Marksville on Oct. 12, the Caldwell Spartans coming to Moreauville on Oct. 19, the Mustangs going into the Bear’s Den at Bolton on Oct. 26 and the season finale at home against the Peabody Warhorses on Nov. 2.

“Honestly, we don’t have a lot of speed this year,” Boone said. “We don’t really have anyone who can score from anywhere on the field. We will have to pound it down the field.

“That’s not necessarily a bad thing,” Boone continued. “There have been games where we scored too fast for our own good. You always want to score on every possession, but there’s something to be said for wearing the other team down first.”

Boone said the Mustangs “will be paper thin” at several positions, so there will be a lot of prayers that players stay healthy, injury-free and don’t run afoul of school rules.

The team is already reeling from the expulsion of two starters late last year that will keep them off the football field this season.

“If we stay healthy, we’ll be tough to beat,” Boone said. “We have talent in all the right spots. It’s just a matter of being lucky and not getting anyone hurt.”