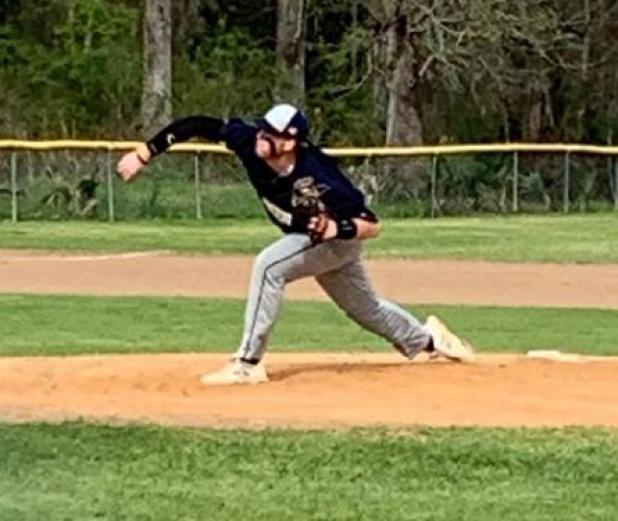 For some teams, the most important game of the season is the one that puts them into the playoffs.

For the struggling St. Joseph Eagles, the most important game of the season so far was a drought-ending 10-7 victory over Block High on April 2.

The Bears from Jonesville fell to 2-11 on the year.

Pitcher Ross Schexnayder earned the win, pitching six of the seven innings and striking out 12 batters while walking three.

Like their basketball-playing classmates, the Eagles baseball team is missing its head coach, Luke Mayeux.

Brandi Schexnayder has taken the reins, aided by several volunteer coaches who have steered the team while Mayeux serves his country overseas in the National Guard.

“The boys get to ‘facetime’ with Luke and let him know what they are doing,” Coach Schexnayder said. “They sure miss him.”

The Eagles lost a douleheader to Opelousas last Saturday, dropping one game 15-4 and the the other 9-1.
.
St. Joe played its first district game of the season against Reeves on Monday (not included in this article).

The Vikings lost to District 4-AA rival Menard, 10-3, on April 2, but still sports one of the best records in the parish at 10-3 overall and 0-1 in district.

In its game on March 28, Charter took advantage of a 7th-inning error and a Luke Rousseau home run to turn a 7-2 deficit into an 8-7 victory over Oak Hill.

Rams starting pitcher Chase Gardner hit a grand slam homer to score four runs in the sixth to take what most would consider to be a safe 7-2 lead with only two at-bats left for the home team Vikings.

Oak Hill relief pitcher Braydon Cedus took the loss. He gave up two runs on no hits in one-third of an inning, striking out one batter and walking one.

Jackson Ragusa threw 1 2/3 innings in relief for the Vikings.

The Mustangs opened last week with an 11-2 loss to Jena on April 2.

The Moreauville team closed the week with a rematch on April 5, losing 9-1.

The ‘Stangs were 9-9 overall and 2-4 in district after last week’s games.

The Panthers continued their winning ways in the first half of the week with two wins against district foe Rapides.

The Panthers hosted Winnfield -- a football rival but not in Bunkie’s baseball district -- on Friday, defeating the Tigers, 4-2 to end the week with a 15-7 overall record and 3-1 in District 4-AA.

MARKSVILLE
Marksville had no trouble beating District 3-AAA rival Bolton on April 2, scoring seven runs in the first four innings before the Bears got on the scoreboard. The Tigers went on to skin the Bears, 12-4.

Quinlan Snyder pitched one inning in relief, facing six batters, striking out one and allowing one run on two hits.

Both pitchers are freshmen.

Brayden Flores was 4-of-5 at the plate, driving in three runs. He also stole three bases during the game.

Nick Paulk had three hits in his five at-bats and knocked in five runs. Luke Normand had two hits and two RBIs and also stole a base.

The Bears ventured to Marksville on April 5 for a rematch. The Tigers won that game, 8-5. That left the Tigers at 4-14 overall and 3-3 in district play.

Avoyelles had two one-point losses early in the week.

The Lady Mustangs lost a close and hard-fought game against Breaux Bridge, 8-7, on April 3.

Avoyelles led off the 1st inning with three runs, only to see the hosting Tigers answer with four runs. The Lady Mustangs regained the lead in the top of the 2nd, scoring four more runs to take a 7-4 lead. Breaux Bridge narrowed the gap to 7-6 in its turn at bat.

Avoyelles was unable to score in the remaining five innings. The Tigers’ bats also cooled down, but not enough for their visitors’ liking. Breaux Bridge scored a run in the 4th and another in the 5th to give them the winning margin.

The Lady Mustangs closed the week against two smaller schools, defeating Grace Christian, 14-2 on Friday and losing an 18-15 decision to Ascension Episcopal on Saturday.

The Lady Vikings only had one game last week, but it was an important one.

The win raised Charter’s won-lost record to 13-10 overall and 3-4 in district play.

The Lady Vikes played St. Joe on Monday, but that game was played after deadline for this edition and will be reported in the April 18 newspaper.

The Lady Panthers gave their fans a thrill on April 3 with a back-and-forth contest with Delta Charter in Ferriday. Bunkie scored two runs in the 7th inning to take a tough 4-2 victory.

Bunkie had a two-run 7th inning and was able to keep the Storm batters from scoring to cement the win.

Jensen Gremillion pitched seven innings for the Lady Panthers, allowing five hits and two runs while walking one batter and striking out 17.

Grace Quirk had two hits at three at-bats, including a double, and drove in one run.

Later in the week, Bunkie defeated Lacassine, 11-2, on Friday to close the week with a 16-9 overall record and 2-4 district record.

The Lady Tigers had no other games games last week besides a 10-4 loss to St. Joe on Friday, which left Marksville at 4-15 overall and 3-2 District 3-AAA record. Marksville traveled to Lecompte Tuesday to face the Lady Mustangs from Rapides (not included in this article, but will be included in the next report).

ST. JOSEPH
St. Joseph’s Lady Eagles had a busy schedule over the past few days with four games last week and two earliler this week.

St. Joe started the week on April’s Fool Day with an 11-9 victory over Bolton. The next day, it won a close contest with Avoyelles, 7-6. The Lady Eagles lost to district rival Plainview, 15-0, on April 3.

It defeated Marksville, 10-4, on Friday and played two more of its larger neighbors -- Avoyelles Charter and Bunkie --on Monday and Tuesday, respectively (not included in this article but will be in next week's report).