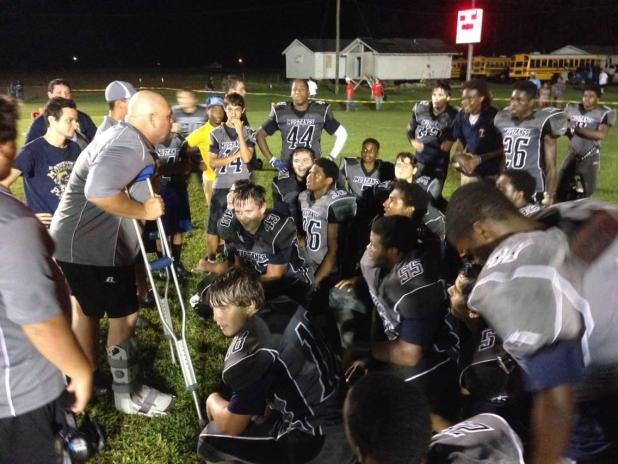 Avoyelles High football Coach Andy Boone huddles with his Mustangs during the 2014 season, just a few months after being seriously injured in an automobile accident. He was on crutches for eight months and still has a plate and screws in his leg. His son, Wesley Boone, won an Associated Press collegiate journalism award for a video feature, “The Andy Boone Story” about his father’s struggle to recover from his injuries. {Photo courtesy of the Boone family} 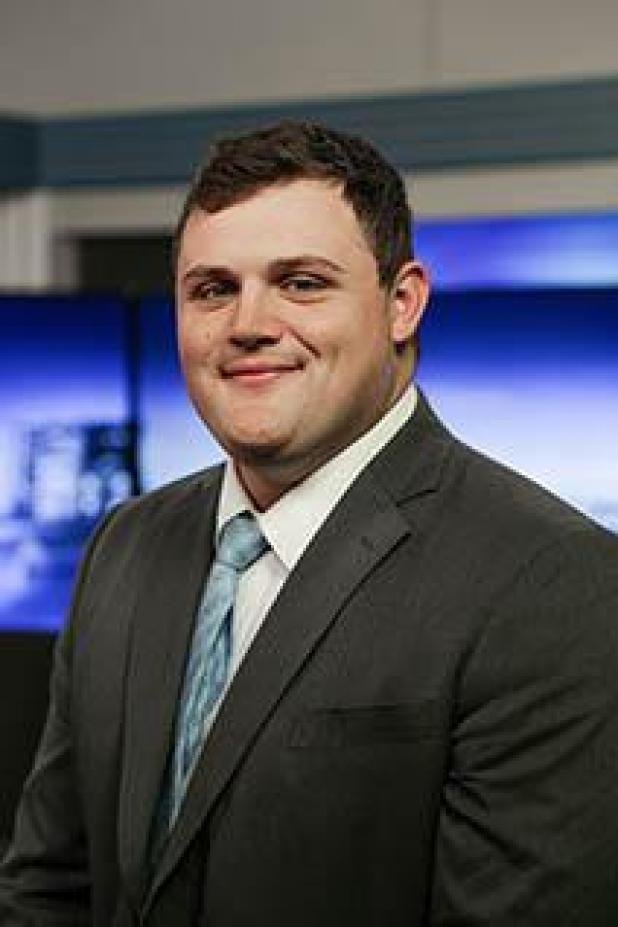 A classic piece of advice to writers is to “write about what you know.”

The 1st place feature was “The Andy Boone Story.” The subject is Wes’s father -- and coach when he played football at Avoyelles High.

The piece also placed 2nd in the “Sports Feature” category at the Louisiana-Mississippi Associated Press College Broadcast-ers Awards for 2017, held at the WWII Museum in New Orleans this past July.

The AP awards were not the only ones Boone collected in his last year as a collegiate broadcaster.

He was also named Collegiate Louisiana Broad-caster of the Year by the Louisiana Association of Broad-casters. Boone was the first winner in solely sports coverage.

Boone’s award-winning feature is about 4.5 minutes long and can be seen on YouTube.

It tells the story of Andy Boone’s struggle to recover from a serious auto accident in the summer of 2014 and return to the sidelines to coach the Mustangs in 2014.

Mustang fans from that year will recall the coach on crutches during the season, still pacing the sidelines in his animated manner.

“That feature is about something that was obviously dear to me, so I wanted to get it right,” Wesley said. “I did it for a features class. The teacher said to identify with a story that was worth spending a lot of time.”

Boone immediately thought of his father’s recovery from the auto accident.

“Seeing what he went through, especially seeing him immediately after the accident, was a shock to me,” Boone continued. “He was always so active and there he was, bedridden and unable to move. It messed with him a lot, you could tell.”

Boone said he wants to turn the short feature into a documentary at some point.

“It is a very personal thing, but it is cool to see how it came about,” he continued. “I think it also helped Dad find closure with the experience.

“It was fun for me and it helped him.”

In addition to the two awards for the feature on his father, the 2013 AHS graduate won the event’s top award, “Best of Show in Television,” which also included a $150 cash prize. He was also named the two-state region’s best videographer for his videography composite.

Boone graduated from SLU in July with a degree in journalism. He lives in Alexandria, where he works as a news/sports reporter for KALB-TV.

The AP judges said Boone’s feature on his father was “such a moving story. The reporter did an excellent job of creative storytelling and videography. It was well written with great transitions in and out of the soundbites. Well told and well done.”

Boone said he is glad his path eventually led to SLU.

He initially went to ULL but came home the next year to attend LSUA.

He said he was given opportunities, experience and training at the Southeastern Channel that he doubts he would have had at another school.

“Awards are cool because it’s someone saying, ‘I like what you did,’” Boone continued, “but the reason you do this job is not for recognition. You do it because you love to tell stories -- interesting stories in interesting ways.”

Andy Boone once listed Wesley as one of the best football players he had ever coached.

Then he sustained his third concussion as a high school football player in his senior year.

“I realized that college ball was not in the cards for me,” Boone said. “Schools I would have wanted to play for lost interest due to the concussion issue.”

Boone said it was hard to accept that something that had been so important in his life could no longer be a part of it.

“I had the opportunity to play in a high school all-America game and took it,” he said. “Mainly, I wanted to prove to myself that I could. I ended up being the leading rusher in the game, as a fullback.

“I think that was a good way to end my relationship with football.”

He said he does not regret his years of playing football, although his first concussion “was the most terrifying experience of my life.

“One minute I was playing football and the next thing I knew I was waking up in the hospital,” he said. “Then I was told I played two more quarters after I was hit. I didn’t remember anything. I was watching the game film after the concussion and did not remember doing any of it.”

The other two concussions were not as serious, as far as blackouts, but they took their toll.

Still, he said, playing football allowed him to spend a lot of time with his father, “and those are the best times of my life.

“I gave football my all and I cherish having had the opportunity to play for my dad from my first down in PeeWee Football to the last snap as an Avoyelles Mustang,” Boone said. “He was always my coach.”