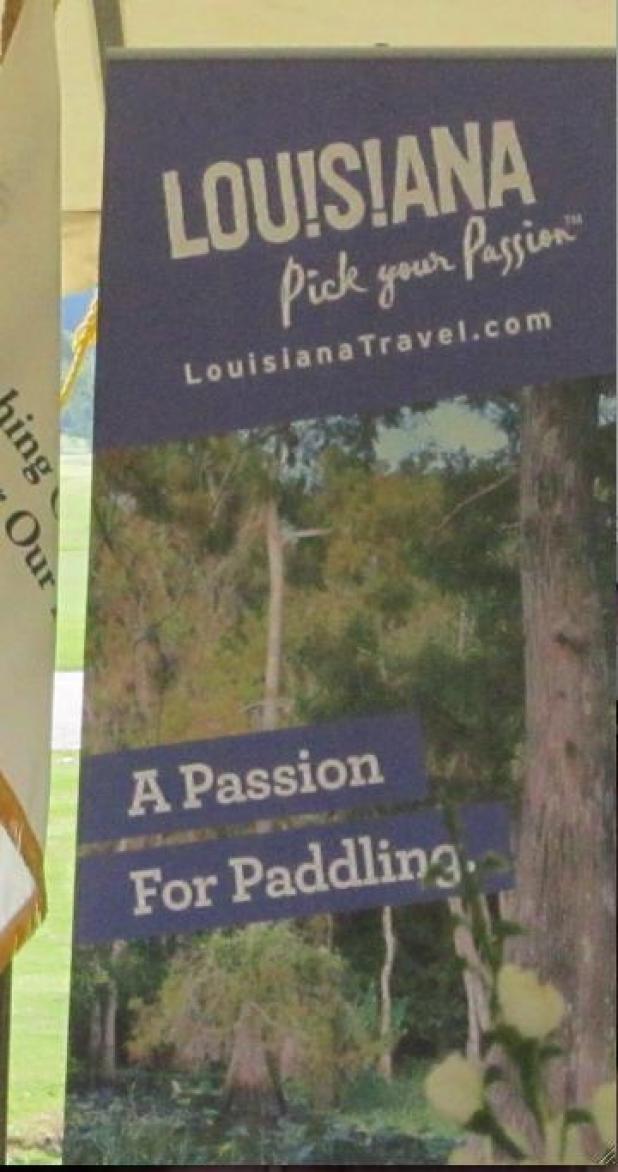 A FUTURE IN TOURISM
Canoe and kayak paddling is a growing tourism attraction in Louisiana. The 410 Louisiane River Race combines the 275-mile Tour de la Riviere Rouge and the 135-mile Tour du Teche in what is expected to become one of the nation’s premier paddling events. Avoyelles Parish outdoors organizations and tourism advocates are hoping to develop canoe/kayak trails in the parish's scenic waterways to entice more visitors to the area. They hope the Red River paddle races become popular and increase interest in the recreational sport of paddling.

It is the third year for the Red River kayak/canoe races. That means the first “Louisiana Triple Crown” winner will be named at the end of the Tour du Teche -- which is also the final segment of the 410 de Louisiane.

A good stretch of the race runs through Avoyelles Parish, on the Red and Atchafalaya rivers. Those wanting to get a glimpse of racers can watch the river in early October from such sites as the Brouillette Boat Launch and Ben Routh Park in Effie.

Avoyelles tourism advocates hope this race will gain in popularity and participation, which will then result in a growth of interest in “paddling” in general. Canoe/kayak trails in the parish’s waterways is seen as one of the most likely expansions in the parish tourist attractions.

The Red River race is not much of a spectator sport. There is no large groups of racers clumped together and there is no set timeline on when racers will pass a certain point. For that same reason, would-be “joiners” might have a long wait before a racer comes by that they can paddle along side for awhile -- although they are welcome to do so.

It is still not too late to actually register for the race.

Those who forgot to register for either the Tour de la Riviere Rouge (Bossier to Port Barre), the Tour du Teche (Port Barre to Berwick) or the grand challenge 410 Louisiane (Bossier to Berwick), can still take advantage of late registration until Sept. 23. Registration information can be found at the race website at tourduteche.com.

The two shorter races can either be stand-alone events for paddlers or be combined as the 410 Louisiane.

The Red River races begin in Bossier on Sept. 30 for their third year. The more-established Tour du Teche will begin in Port Barre on Oct. 6. The Teche race is run in stages and will end in Berwick on Oct. 8.

Race director Ray Pellerin is expecting a good turnout of paddlers in the Red River races -- not as many as will participate in the Teche contest, but the Red events are still building.

The 410-mile super race is getting a lot of national attention in the canoe/kayak community. When the three-year quest for the “Triple Crown” starts over again next year, the events are expected to attract even more national competitors.

The 275-mile long Tour de la Riviere Rouge includes not only the navigable section of Red River from North Louisiana through Avoyelles, but also a trip down the Atchafalaya to Krotz Springs and a motor portage to Bayou Courtableau for the final sprint to victory in Port Barre.

The kicker is that teams must finish the course in under 129 hours.

The fastest time in the past two years is 38 hours by a team that made the 275-mile trip non-stop with team members paddling in shifts.

“They thought they could make it in 24 hours, but it couldn’t be done,” Pellerin said.

For the truly brave of heart, strong of back -- and possibly weak of mind -- the TRR is just the first part of the grueling 410-mile Louisiane. The 135-mile Tour du Teche is the second part.

The Bossier-to-Berwick contest has been touted as one of the most taxing canoe races in the country.

Avoyelles’ history -- and some say its future -- is linked to the Red and Atchafalaya, and the Riviere Rouge event has the potential to become one of the premier paddle races in the country.

The Tour de la Riviere Rouge is an “adventurers’ race,” Pellerin said. “Unlike the Tour du Teche 135, there are no check points, no mandatory stops and racers have the option to portage around or lock through the five dams on the Red River.”

Teams must have a coureur de bois accompanying them along the bank and must employ a SPOT Tracker which allows their progress to be monitored by GPS on the internet.

Both segments must be completed by the same team in the same boat. No changing horses in the middle of the river race.

Pellerin said the length of the Louisiane and the varying conditions of the waterways traveled “make this one of the toughest paddle races in the country.”

There can be a Triple Crown winner in each category. The Triple Crown was established in 2015 when the Red River races were begun.

The three-year quest for the honor allows paddlers to combine their fastest overall time in each of the three races -- the Riviere Rouge, the Teche and the Louisiane.

Going into this year’s race, eight teams have already qualified for contention by recording times in the three races. There could be more contenders after this year’s races.

The rules for eligibility for the Triple Crown state that racers cannot compete in the Rivière Rouge and/or Tour du Teche 135 in the same year they are using for their Louisiane race time.

Racers may enter both the Rivière Rouge and Tour du Teche 135 in the same year, the Louisiane another year and then try for a faster time in the third.

Racers registered in the 410 who drop out of the upper segment may re-enter the TDT and racers who drop out in the lower segment can keep their Riviere Rouge time.

The Louisiana Triple Crown recognizes the individual paddler, so a paddler vying in a multi-paddler class is not required to have the same partners for each race of the Triple Crown nor are they required to achieve the feat in the same boat. However, the boats must be in the same class.

Pellerin said the Red River races “aren’t really spectator events. Boats come by at all hours because it is not a staged race.” However, each boat’s progress can be tracked on the Race Owl website, he added.

Thought was given to creating stages, like the Tour du Teche, “but it’s such a long distance, it didn’t seem feasible.”

The distance and the physically taxing course are also why a coureur de bois, or bank runner, is required. Pellegrin said he has had numerous calls from racers, even veteran long-distance racers, who complain about the requirement for a coureur following along the bank.

“All of our racers are monitored by GPS and their time and progress is tracked daily,” Pellegrin said, “but on Red River, we need eyes on the racers at all times -- just in case they get in trouble.”