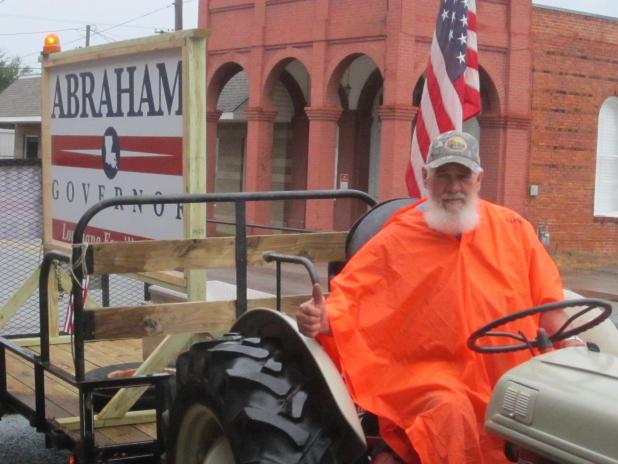 Abe Mattox, of the Spring Bayou community, sits on his 1951 Ford 8N tractor prior to setting off on a week-long trip to South Louisiana in support of Ralph Abraham’s campaign for governor. He was on the road from Sept. 19-Sept. 27. {Photo by Raymond L. Daye}

It could be called the “Abe for Abraham” tour.

Local ironworker and conservationist Abe Mattox of Spring Bayou set out on his 1951 Ford 8N tractor to campaign for gubernatorial candidate Ralph Abraham on Sept. 19 and returned on Sept. 27.

“I’m standing up for a change in government,” Mattox said. “We need a new governor.”

Mattox said he decided to take his vintage Ford to communities south of I-10 because “I believe that is where Abraham needs more help.”

There is no doubt Mattox would find friendlier, more receptive audiences in central and north Louisiana communities, where Abraham’s name and face are better known and his conservative politics suits many voters.

That’s exactly why Mattox decided to drive his tractor -- decked out with a large American flag and Louisiana flag -- to Lafayette, Houma, Crowley, Lake Charles and other South Louisiana communities before coming home.

AT LEAST A WEEK

Mattox had planned to be on the road for at least a week, and possibly longer if donations for the efforts allowed. He received several donations to defray the cost of the trip, including one from a businessman in Arkansas.

If funding allows, he will take another trip north to Shreveport before the Oct. 12 election.

He will not be raising funds or accepting donations for Ralph Abraham.

Abraham said the only money he will be accepting is from those donating "to pay for gas, food and other expenses on the road. I certainly won’t be making any money. I am closing my shop to take this trip.”

Mattox said his given name is Abe -- just Abe, not Abraham -- but the similarity between his first name and the GOP candidate’s last name is not lost on him.

Neither is the similarity between his 1951 Ford and its driver.

“They stopped making the 8N in 1952,” Mattox said. “It was also the last year Ford used only American-made parts.