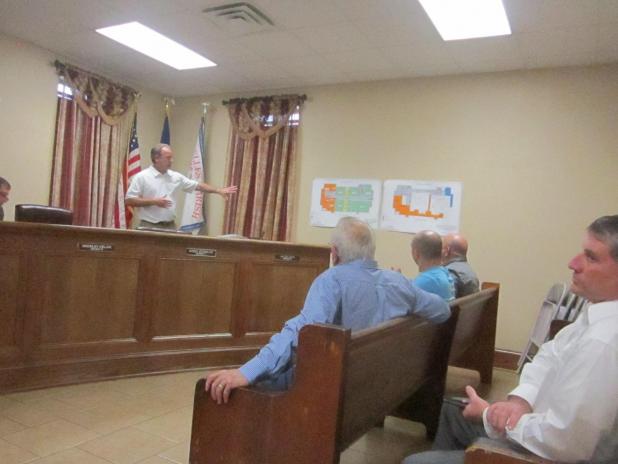 Voters who overwhelmingly rejected a separate “justice center” to house the 12th Judicial District courtrooms and offices may get an opportunity to approve a temporary sales tax to fund a major remodeling of the 92-year-old courthouse to address some of the problems the defeated tax proposal had targeted.

Preliminary floor plans for the remodeling have been drawn up. The plans include a second elevator and restrooms on the second and third floors.

The third floor “would be completely gutted,” Parish Engineer Ron Bordelon said. “The second floor would gut the Police Jury meeting room and the area now containing the HUD and Permit Office.

The judges’ offices would move to the second floor under this proposal.

The remodeled third floor would have two courtrooms of approximately the same size, an inmate holding area, a jury deliberation room and public restrooms.

One courtroom would be able to seat 97 spectators and the other would seat 104.

The project would cost between $2.5-3 million, but Bordelon said the aging courthouse could use even more than that to address all of its problems “which go all the way to the roof and down into the sewer.”

A “working group” of jurors, judges and other courthouse officials has been meeting over the past month to discuss ways to address the problems with the current courtrooms and judges’ offices.

At a meeting on Feb. 4, several funding proposals were floated for discussion.

“I may be shot for saying this, but I was thinking about proposing a 1/2-cent sale tax,” Police Juror Charles Jones said.

“You think you MIGHT get shot,” former assistant district attorney Mike Kelly said. “I’ve got the bullet holes.”

Kelly was a leading proponent of the failed 1/2-cent sales tax to support the Justice Center project.

Jones said his idea is to seek a temporary 1/2-cent sales tax that would be collected for two years to collect enough money to pay for the courthouse remodeling project.

Jones said many opponents of the 1/2-cent tax for the Justice Center said they would support renovating the courthouse to address the problems the new facility would have solved. A 1/2-cent sales tax would generate approximately $2.1 million a year. That would be about $4.2 million if collected for two years.

The sales tax could possibly assist with the initial costs of setting up the “One Stop Shop” -- an annex using a currently vacant building near the courthouse -- which would house the Permit Office, HUD program and other offices displaced to make room for the judges’ offices on the second floor of the courthouse.

Although not originally envisioned as part of the courthouse remodeling project, the plan to move the judges’ offices to the second floor dovetails nicely with the annex project.

The jury will be visiting five buildings around the courthouse that have been offered for sale.

Jurors are also considering the possibility of creating a third courtroom and judge’s office in the annex if the parish is granted a third judgeship. Jones said the Police Jury could borrow the money to renovate the courthouse, but that is not a preferred solution to the funding problem.

The need for a voter-approved tax could be avoided if the parish could obtain a state capital improvements grant, the group noted.

The application deadline for this funding cycle has passed, but Bordelon said it could still be considered if the parish’s legislators endorse it for the upcoming legislative session.

Avoyelles Parish already has several requests in the hopper. A few may have a good chance of approval and a few are considered long shots at best.

Police Jury President Kirby Roy said the parish is already in a position that if all of its wishes were granted, the jury couldn’t afford to pay the required 25 percent matching funds to obtain the grants.

“We may have to sell popcorn balls, but I can say we would find the matching funds if this project was approved,” Jones said.

“If we put this one forward, it would become our No. 1 priority,” Roy said.

He said other projects, including the much-needed road improvement program, would have to step back in favor of the courthouse remodeling effort.