R.H. Deason of Belledeau (left) and John M. Muckleroy Jr. of Natchitoches display the photo of the USS Guam that Deason bought at a flea market. The photo was owned by Muckleroy’s father, who served aboard the Guam during WWII operations around Okinawa and the South China Sea in 1945. Deason, 97, was an Army spotter and gunner in the Philippines during the same time the Guam was patroling in that area. The two men never met. Muckleroy died in 1994 at the age of 68. {Natchitoches Times photo} 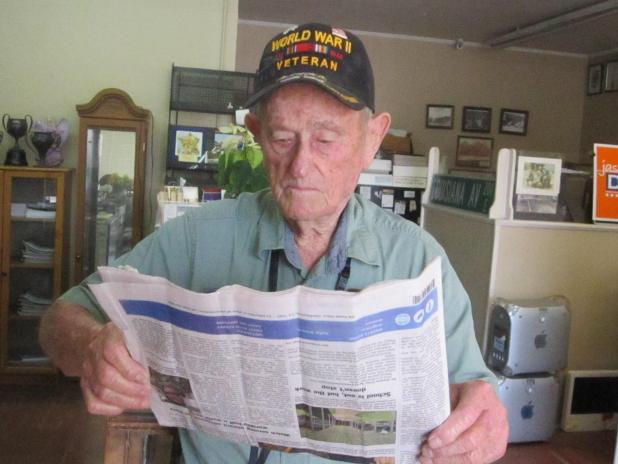 R.H. Deason of Belledeau reads the Natchitoches Times article about his efforts to return a fellow WWII veteran’s photo to his family. Deason, an Army veteran of the South Pacific, found the photo of the USS Guam at a flea market. The photo had Navy Seaman 2nd Class John Muckleroy’s name on it. Deason undertook the mission to locate the sailor’s family and return the photo to them. {Photo by Raymond L. Daye}

{Editor’s Note: The following article, which features World War II veteran R.H. Deason of Hessmer-Belledeau, was printed in the Natchitoches Times and is reprinted here with that newspaper’s permission.}

From a dumpster to a grateful son’s hands, a seven-decades old photo finds a permanent home.

Sounds like a teaser for a Ryan Gosling movie or an old Perry Mason episode.

John Muckleroy Jr. grew up knowing his father served in the U.S. Navy in WWII.

Their story began in the unlikely location of a flea market on Hwy 84 near Logansport April 26 when Deason and his daughter, Lisa, and son-in-law Kevin Wiley were headed to a family reunion in Texas.

They spotted the flea market and decided to stretch their legs and browse.

Deason was wearing his WWII veteran’s hat when a vendor approached him, asking if he’d like to see a WWII photo. She gave him the framed picture that included a list of awards and the name “Muckleroy.”

Not a Navy man, but a veteran and someone who appreciates memorabilia, Deason accepted the photo and continued on to the family reunion.

“I said it would take Perry Mason to figure this out,” Deason said, but he was willing to try to locate Muckleroy’s family.

The first week of this month (May), he went to the VA in Pineville and showed the picture to his patient advocate, Tracy Tam.

“He had told me he was going to the family reunion, so I was expecting to hear all about it,” Tam said. “Instead, he began unwrapping a bag he had strapped to his scooter.

“He said, ‘I have a job for you,’ and began to tell me about the picture,” she continued. “He wanted the family to have it. I agreed to help him. I mean, when Mr. Deason, at 97, asks for your help, you give it,” she added with a laugh.

HAD BEEN A VA PATIENT

Tam said she thought finding the family would never happen, but they looked up the ship online as well as for a list of names and an online yearbook.

“When it was time for him to go, he says, ‘Well, now that’s your job,’” Tam said. “It was a name I had never heard before and oddly enough a man by that name had been to this facility at some time. I said it wouldn’t hurt to try the contact information I had. I called and left a message.”

The son called back.

“What a call,” Muckleroy said. “She (Tam) started by saying who she was and that a patient had something pertaining to my dad and WWII. She told me the patient’s name, age and that he would like for me to meet him so I could have the picture.”

“I didn’t know if the family would even care about the picture,” Deason said, “but I wanted to try to get it to them to see if they wanted it.”

Imagine Deason’s surprise when Tam contacted him the very next day to say she had located Muckleroy’s son.

That family could have been anywhere on earth, but miraculously the son was in nearby Natchitoches.

A couple of phone calls later and the meeting was set.

“I brought a lot of stuff, memorabilia, I thought he’d like to look at,” Muckleroy said.

The first thing that caught Muckleroy’s eye when he entered Deason’s home was a whole wall displaying the veteran’s time in service.

“He had pictures, certificates and even his uniform proudly displayed,” Muckleroy said. “It was impressive.”

The men, along with Muckleroy’s wife, Paula, and Deason’s daughter and grandson, Cody Baker, sorted through the memorabilia, pictures and books and heard stories of Deason’s time in the South Pacific.

“I was in the Philippines when Truman dropped the atomic bomb, effectively ending the war. Everyone surrendered,” Deason recalled. “Just think, I was there three years, three months and 28 days and didn’t see a single person I knew.”

The name of the ship Muckleroy’s father served on was the USS Guam.

With the assistance of U.S. Navy reservist Trent Friedel, of Natchitoches, Muckleroy learned his father’s rank was Seaman 2nd class.

Even Perry Mason can’t solve the mystery of how the historic photo wound up in a dumpster, was found and made it into a flea market in Logansport on a day a WWII veteran was compelled to stop and browse, then to the VA and finally into the hands of the son whose father’s name is penned to the front.

“It’s just all a coincidence to me,” Deason said. “It was meant to be this way. Ms. Tam was very helpful, very good to me.”

All these decades later, after those three years of not knowing anyone, he found someone he’s glad to know.

Muckleroy, who has the photo in his office at First Credit Corp. in Natchitoches, agrees.

R.H. Deason is a native of Palestine, Texas, and a long-time resident of Hessmer who just recently moved to Belledeau.

He attends as many patriotic events in Avoyelles as he can, always proudly wearing his cap proclaiming him as a World War II veteran -- an elite class of Avoyelleans that sadly gets smaller every year.

John Muckleroy Sr. was a native of Union Parish who moved to Natchitoches. He died in 1994 at the age of 68.

John Muckleroy Jr. told this newspaper he is donating the photo, along with the story of how it came back to the family and other related memorabilia, to the new Union Parish World War II Museum, which opened in Farmerville on June 17.