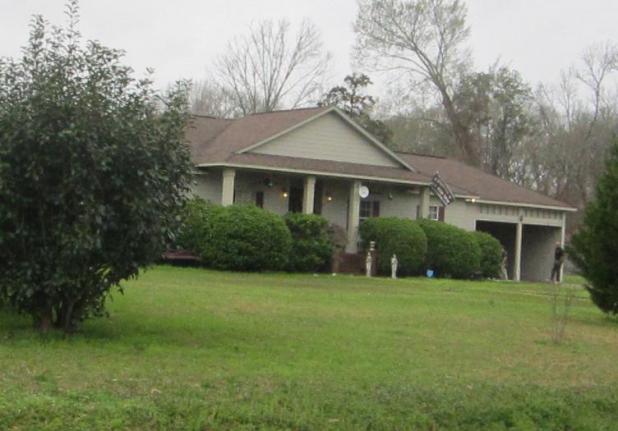 Avoyelles Parish Sheriff’s deputies walk around the house on Faith Baptist Mission Road a few hours after Deandre Williams was shot and killed there on Feb. 4.
{Photo by Raymond L. Daye}

In what seems to be an all-too-common event in recent weeks, an Avoyelles Parish law enforcement agency is investigating the murder of a parish resident gunned down for no apparent reason.

The latest of the mid-winter murders occurred Tuesday morning (Feb. 4).

Deandre Williams, 30, was picking his daughter up at his mother’s house to take the child to school when he was shot at about 6:30 a.m. at the house on Faith Baptist Mission Road, just outside of Marksville.

There were other people in the house at the time of the shooting, but there were no other injuries.

Authorities have not provided any details on how the fatal shooting occurred.

Williams was taken by ambulance to Avoyelles Hospital where he died from his wounds.

Just a little over a week earlier, 52-year-old Davis “Keith” Cooper was killed on the porch of his Overton Street home in Marksville.

On Jan. 24, Cooper walked outside shortly after midnight to investigate gunshots in the neighborhood. He was hit once in the chest by what authorities believe was a .38 caliber bullet.

No arrests have been made.

Two days after the Marksville murder, Detravion Burnett, 31, of Bunkie was shot and killed while sitting in his pickup truck on La. Hwy 115 at approximately 2 a.m. on Jan. 26.

Burnett was shot once in the upper leg. He was taken to Bunkie General Hospital where he died from his wound.

Bunkie Police Chief Scott Ferguson said Burnett was a passenger in the vehicle. The driver was not injured.

Ferguson said approximately 20 bullets were fired at the truck.

The first recent murder to shock Avoyelles Parish area communities occurred at the Yambilee Building in Opelousas around 1 a.m. on Jan. 5.

Terrell Ford II, 28, of Morrow -- a St. Landry Parish community a few miles from Bunkie -- had stopped to visit with friends attending a zydeco concert. While he and his 8-year-old son were sitting in their vehicle, a barrage of bullets was fired. Fortunately, perhaps miraculously, Ford was the only one struck by the gunfire.

He was taken to a hospital where he died from his wounds. No arrests have yet been made in that case.

Authorities are asking anyone with information on the incident to contact Crime Stoppers at 948-TIPS or provide tips online at stlandrycrimestoppers.com.

In addition to these murders, there have been several recent non-fatal shootings and armed robberies.

The 2020 ratings are based on FBI crime statistics for 2018, the most recent full year of stats available when the online sites compiled their report.

According to Only In Your State.com and Roadsnacks.net, Marksville is the 4th most dangerous city in the state.

The ranking combines the violent and property crimes reported for 2018 and then converts that to a crime/per 100,000 population to get the crime rate for the municipality.

The FBI warns against using the statistical data for such comparisons and notes that not all law enforcement agencies submit their data to the FBI.

A check of the most recent FBI report found the only other Avoyelles municipality in the report was Moreauville, which had no crimes reported.

The other seven parish municipalities were not in the report.