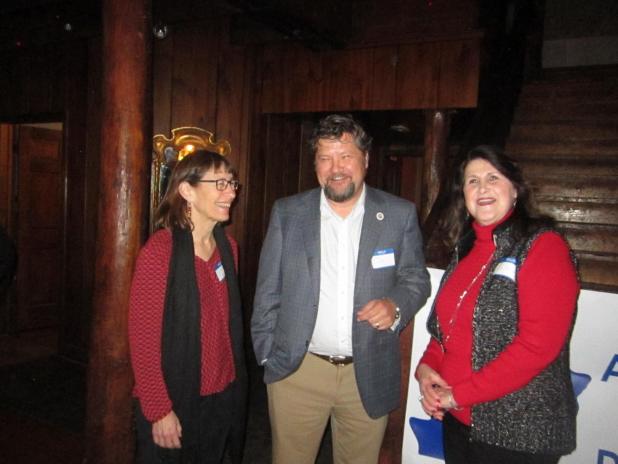 State Rep. Daryl Deshotel (center) shares a laugh with guest speaker Julie Schwam Harris (left) of New Orleans and Avoyelles Association of Democratic Women Secretary Arla Couvillion Bush during the AADW’s pre-Legislature forum on Feb. 3. Deshotel quipped that he was probably the only Republican in the room. {Photo by Raymond L. Daye}

While some say the “love of money is the root of all evil,” and others contend that “money makes the world go ‘round,” most will agree that the economy is one of the key pillars that hold up a modern society.

That point was made during a pre-Legislature forum hosted by the Avoyelles Association of Democratic Women (AADW).

Special guest for the event at Bailey’s on the Square in Marksville was state Rep. Daryl Deshotel -- who noted he is neither a woman nor a Democrat, but was honored to be invited and enjoyed the evening of discussion.

Guest speaker Julie Schwam Harris -- who chairs the Advocacy Committee of the New Orleans-based Independent Women’s Organization and works with a non-partisan coalition of 22 civic organizations around the state -- said events like this are important for the future of Louisiana.

“There are so many people in the state who don’t know what the Legislature does or who their legislators are,” Harris said.

Avoyelles is fortunate in that the entire parish is in State Representative District 28 and that it does not have to share that district with anyone outside of the parish. This makes the district and the parish unique.

“In Slidell there are four state representatives,” Harris said. “The districts are gerrymandered so that they twist and turn and make no sense.”

While purely political activities such as drawing election districts do affect the state, Harris said almost every problem in society can be improved if the economic problems are solved.

“When you talk about the important issues of economic security, access to affordable health care, access to quality public education, eliminating discrimination against women and addressing violence against women, the fact is if you solve the underlying economic problems it can help to solve all of those other problems,” Harris noted.

When the Legislature starts tackling those key economic issues in the upcoming session that begins March 9, Deshotel and State Sen. Heather Cloud -- who represents most of the parish in the Senate -- will be playing key roles.

Deshotel has been named to the House Appropriations Committee and Cloud was appointed to the Senate Finance Committee.

He said he will be independent, not tied tightly to a party or to any powerful individuals or interest groups.

“Nobody will be able to tell me how to vote,” Deshotel said.

“A lot of the national Democratic Party views were expressed during the night,” Deshotel said, “but it was very encouraging that they wanted my input and were not so partisan.”

AADW spokesperson Liz Leger also said she is hoping for a bipartisan spirit of cooperation among legislators this session and among various groups in the parish.

Leger noted that Avoyelleans of different political philosophies have more in common than not.

Leger also noted that poverty is a unifying factor, with many parish residents of all races and party registrations struggling below or near the poverty line.