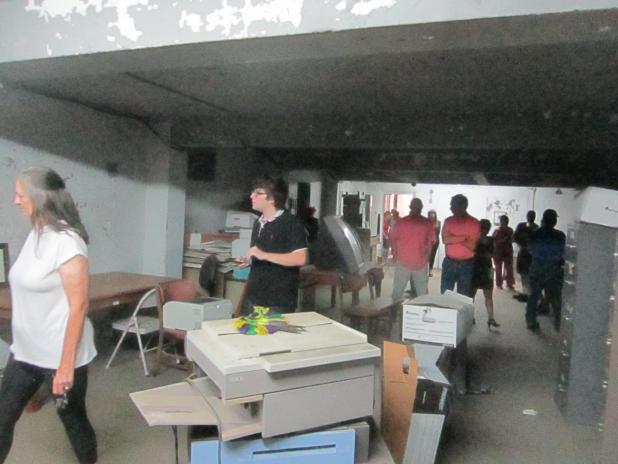 A group of at least 30 concerned citizens toured the 4th Floor -- the former parish jail -- in the Avoyelles Parish Courthouse on Sept. 4. Another tour was held this past Saturday. {Photo by Raymond L. Daye}

Some say there is no need for a new Justice Center to house the courtrooms and judges’ offices because there is an entire floor going unused in the current 91-year-old courthouse.

District Attorney Charles Riddle sought to give the public an opportunity to see that unused area and to answer any questions in two tours last week.

On Tuesday he said he hoped the Saturday tour included school-aged children so they could see that part of the parish’s history.

The area is a drab gray of peeling paint. It was extremely hot and muggy during the tour.

The gallows was a “must-see” stop on the tour.

Climbing the stairs to the bar that held the noose as the condemned stood on a metal trap door is an eerie feeling. It is believed that only one man ever had that feeling for real from the time the courthouse was dedicated in 1928 to when the state did away with local hangings in favor of the electrocutions in 1941.

“People had questions about using the 4th Floor,” Justice Center Commissioner Mike Kelly said. “We wanted to show them the condition of the area.

“Hopefully they understand it is not feasible to renovate this area to solve the problems we have on the 3rd Floor,” he added.

Wayne Coco of Simmesport, architect for the proposed Justice Center, said any renovation of the 4th Floor would be expensive and would trigger even more expensive costs throughout the rest of the courthouse.

“If the 4th Floor is put into use, it would change the code requirements for the entire building,” Coco said. “It would require a sprinkler system on all four floors, another elevator and many other improvements to bring it up to current codes.”

Coco said the best use of the area would be as a museum or “possibly for a few offices.”

It could not feasibly be used to address problems with the two courtrooms, including trying to keep inmates separated from the general public, he said.

There is one area of open space that could possibly be used to hold inmates while they wait for their court dates.

Even that limited use would require upgrading plumbing, electrical and other building code issues that would be costly and still not address important issues the proposed Justice Center would solve, Coco noted.

Coco said the courthouse “is still a good building and can be useful for many years to come.”

However, he added, it can no longer adequately serve the purpose of housing the courtrooms and other judicial system operations.

He said moving those functions out of the courthouse would still leave many parish offices in the historic building. The Police Jury, permit office, assessor, registrar of voters, Emergency Preparedness and other agencies would still be housed in the courthouse.

The main office for the clerk of court could also remain in the courthouse, although a “satellite office” would need to be close to the judges and courtrooms in the Justice Center. “The Police Jury has to make a master plan on the use of this courthouse when the court system moves out -- and they don’t,” Coco said.

“The court system will eventually have to move,” he continued. “Whether it happens with this proposal or not, it cannot remain in this courthouse much longer.”

The Police Jury has requested state capital improvement grants that would be used to make the area usable, but those applications have not been funded.

Ideas of turning the area into a historical or law enforcement museum have been floated as well. However, the cost of renovation, remodeling and bringing the 1920s-era building into line with 21st Century codes seems to outweigh the benefits from any project proposed for the area.