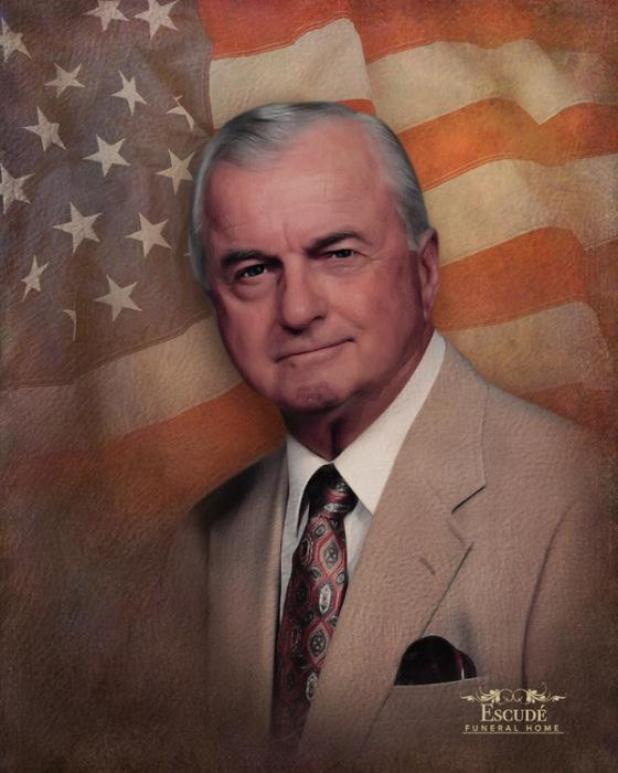 He was preceded in death by his devoted and only wife of sixty-three years, Erline Claudel Ducote; his son, John Ducote; brother, Ervin Ducote; parents, George, and Alma DeSoto Ducote. Harris was born and reared in the Hessmer rural area during the depression era. Despite being reared on a small farm with very limited income from cash crops, his parents provided and insisted he secure the best possible education available at the time and he graduated with honors from Hessmer High School in 1944, excelling in agriculture and Parliamentary Law. His favorite subject however was debating and public speaking, winning not only his school but Avoyelles Parish American Legion Oratorical Contest during his Junior School Year.

He enlisted in the U.S. Navy during WWII, serving in Hawaii until his release to inactive duty with the Naval Reserve in 1946. Shortly thereafter he attended and graduated from Alexandria Business College. He was interviewed and hired on his graduation day in July 1947 by the Texas and Pacific Railway System, working in several different clerical positions in Alexandria. During this period, he maintained his affitiation with the Naval Reserve, therefore when the Korean Conflict was declared during the summer of 1950 he was recalled to active duty. It was during this period he married his longtime sweetheart Erline Claudel while serving as an instructor at Naval Reserve Training Center of Abilene, Texas. He was subsequently released to inactive duty once again, returning to his former employer at Alexandria in April 1952 with a wife and a beautiful baby girl.

In the spring of 1956, he was promoted to a sales position in Pittsburg, PA, so with a wife and two small children they made the transition from temperate Alexandria to snowy and cold Pittsburgh. Subsequent promotions as District Sales Manager moved him to Birmingham, to Atlanta, and to St. Louis. While in St. Louis he was appointed Director of Sales Training-Marketing of parent company, Missouri Pacific Lines. In that position he developed and conducted a series of ongoing personal developmental seminars, aimed at improving the sales and marketing skills of a 400 member sales and managerial force. During this period, he was nationally recognized in the “Who’s Who in Training and Development”.

When the MoPac Rail Lines merged with the Union Pacific Railway System in 1981, he was transferred to their Omaha, Nebraska Headquarters until retirement in 1984, having work continuously for 37 years for the same general employer, albeit different entities. At the same time, he was honorably discharged from the Naval Reserve as a Yeoman Petty Officer First Class, returning to Central Louisiana.

It was during the period beginning at Louisiana College of Pineville in 1953, followed by Duquesne University of Pittsburg, University of Missouri in St. Louis, ending at University of St. Louis School of Professional Studies in 1976 that he earned a Bachelor of Liberal Studies. He accomplished his studies by attending evening and weekend classes while maintaining full-time employment and rearing five children with his wife Erline.

Following his retirement, he and his wife, along with their youngest son Gregory, returned to Central Louisiana, building their home on family property in Mansura. While Erline was engaged in church and social affairs and since he was only 58 years old, he developed and conducted a transportation consulting program, consisting of sales and negotiating skills seminars, traveling throughout the country for a couple of years.

Despite settling to a more leisurely pace of life involving golf, hunting, and fishing, but particularly because of his Type ‘A’ Behavior Trait, he became involved in volunteer work, mainly concentrating on the elderly. Initially he became board member and subsequently Board President of the Avoyelles Parish Council on Aging. His involvement was expanded to include advocacy on legislative matters as Silver-Haired Representative and Speaker Pro-Tem of Silver-Haired House of Representatives. Shortly thereafter the State Association of Council on Aging elected him President of their organization while Governor Edwards appointed him Chairman of Newly Created / State Executive Board on Aging. Their main function was to develop and implement policy and procedures pertaining to the office of Elderly Affairs and its functions, for a four-year period. By then a National Silver-Haired Congress was activated and he was elected Senior Louisiana Senator as well as board member and Treasurer of this organization.

This involved numerous board meetings throughout the country, with periodic Washington D.C. meetings to confer with and advocate elderly congressional action.

During this period, he was presented Louisiana Aging Association Network ‘Outstanding Individual Award’ for contributions to Louisiana’s Senior Citizens.

In addition to his advocacy contributions, he later served as coordinator of ‘Food For Families’ of Mansura area, delivering USDA commodities to needy elderly families, sponsored by New Orleans Arch-Diocese.

He was a continually active as a life-long Roman Catholic member having been initiated by Knights of Columbus in 1946. Upon retirement he was also elected Board President of Mansura St. Paul Catholic Church, later serving as Lector and Eucharistic Member until his passing.