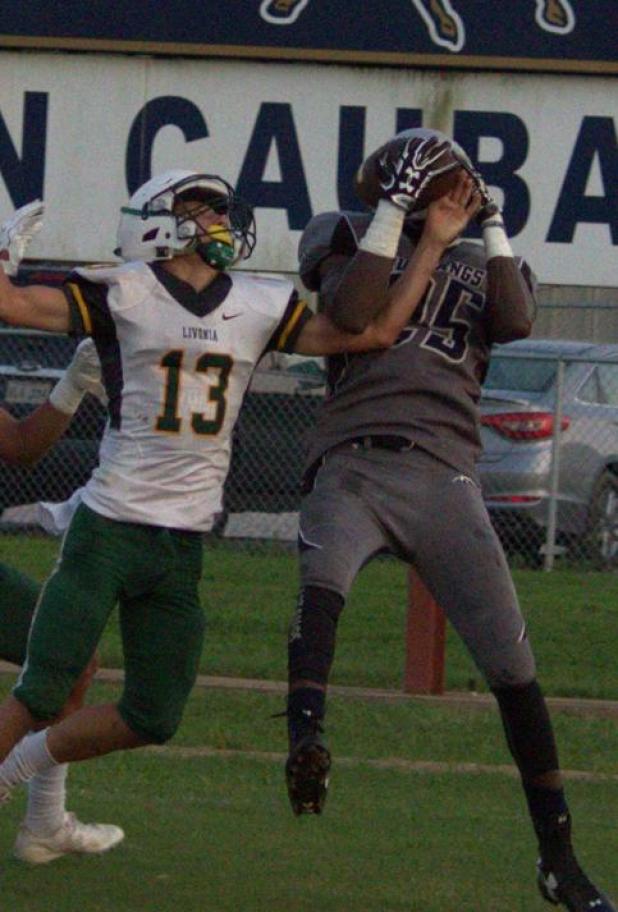 Avoyelles Mustang runningback Myron Robertson (right) barely beats Livonia defender Trent Bergeron to the ball for a touchdown late in the first quarter of the Mustang-Wildcat season opener in Moreauville. The rare TD pass for the “ground-and-pound” Avoyelles High squad made the score 8-6, but the Class AAA Mustangs lost the game to the Class AAAA Wildcats, 16-6. {Photo by Connie Giovanetti}

Livonia’s offense tried to be a good guest, giving the Avoyelles Mustangs a few gifts in the form of turnovers. However, the Wildcat defenders were downright rude, preventing the home team any points following those presents. In the end, Livonia came away with a 16-6 win.

While the Mustangs have every right to be disappointed, they can certainly not be ashamed with their effort against the larger, more talented visitors.

Avoyelles started the game in the best way possible -- recovering the onside kick. However, the Mustangs were not able to capitalize on the opportunity.

Livonia’s defense made its presence known early in the game when Trent Bergeron returned a Mustang fumble 27 yards for a touchdown. A two-point pass from QB Kerri Wells to Shedron Cotton gave the Wildcats an 8-point lead that proved to be insurmountable with 9:03 left in the 1st quarter.

AHS Coach Andy Boone had promised his team would be “surprising” this year. He unveiled one of those surprises late in the first quarter.

After engineering a typical time-consuming drive down the field, QB Brody Knott surprised everyone on the sidelines and in the stands when he held the ball, dropped back and then threw a perfect strike to Myron Robertson in the end zone for a 21-yard touchdown with 1:20 left in the 1st.

The two-point effort failed, leaving the Mustangs on the short end of an 8-6 1st quarter.

To avoid being outscored by its own defense, the Wildcats came back in the 2nd quarter to end the night’s scoring with a 30-yard pass from Wells to Romano Butler with 4:40 remaining in the first half. Max Shaw nabbed a pass from Wells for the extra two points.

The second half was marked with both teams’ offenses frustrated by a combination of penalties, turnovers and dedicated defenders.

Wildcat Coach Marc Brown got what he was expecting.

“We know we may not get a lot of possession time,” Brown said prior to the game. “Avoyelles is effective at holding the ball. We will have to take advantage of the time that we do have the ball.”

Brown is in his first season as head coach of the Wildcats after being the offensive coordinator in 2014 and then leaving to coach Brusly High for two years. He admitted that at this time in the season, he is pinning most of his hopes on his defense.

“We only have four returning starters -- two on offense and two on defense,” Brown said. “I think we will be competitive with Avoyelles, but we need more experience.”

Prior to the game Boone was hoping his out-manned team could stay close to the Wildcats and pull off an upset.

“They don’t have a lot of experienced players, but they are still tough,” Boone said. “They will have 70 kids on the sideline and they have a ton of talented athletes. We’ll see.”

After the game, Brown said the Mustangs lived up to his expectations.

“We put ourselves in some bad situations with turnovers, but our defense bailed us out,” he said. “We knew we wouldn’t have the ball very many times, and I think we only had 29 snaps.”

Brown said he was impressed with Avoyelles' ability to put together the long drive in the 1st quarter, but was also pleased his “bend but don’t break” defense was able to limit the ball controlling Mustangs to a single score “and to keep them from making points off of our mistakes.”