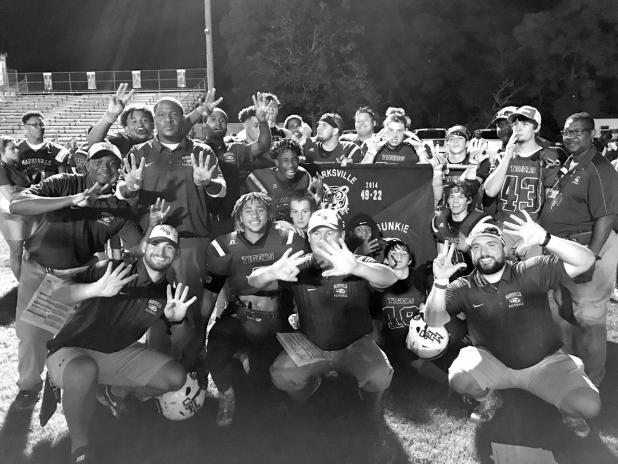 Tigers keep Catskin
Marksville High School Tigers players and coaches surround the coveted Catskin banner after defeating the Bunkie Panthers, 44-0, in the season opener for both teams on Sept. 1. Marksville now holds a six-game winning streak in the traditional rivalry game that was put on hold the past two years due to scheduling conflicts. Bunkie holds an overall advantage in the long-running series. The win means the banner will be displayed again this year at Marksville and be up for grabs again next Fall. {Photo by Crystal Fuqua}

As if there weren't going to be enough distractions with Bunkie and Marksville meeting in football for the first time in three seasons in the renewal of The Battle for the Catskin, Hurricane Harvey added another dimension. Rain from the storm forced both teams into the gym for practices during the week. It also caused Avoyelles Parish to cancel school on Wednesday and Thursday.

Playing on a wet and muddy field, Marksville overcame 11 penalties and turned one of five Bunkie fumbles into a second-quarter touchdown that helped turn a close game into a 44-0 rout in the season opener for both schools.

"We did gym stuff this week and no one likes to practice in the gym," said Marksville coach J.T. Dunbar, "but we got some quality work in. You never like to throw them off-kilter, but the kids did well to adapt."

One Marksville player who adapted well was sophomore quarterback Daniel Miller, who was making his first career start behind center. Dunbar said Miller had trouble with turnovers the previous week in the Jamboree and in the Tigers' preseason scrimmage, committing four.

Against Bunkie on a water-logged field, Miller had zero turnovers and guided Marksville on five scoring drives.

"I thought early he danced around too much, but after he settled down, he did a good job running our offense," said Dunbar. "He was efficient with his passing and I'm proud of how he held onto the ball."

Miller finished with 117 yards rushing on 15 carries and was 3-of-6 passing for 57 yards, including a 44-yard touchdown pass to Jacob Young that blew the game open right before halftime.

Miller said practicing in the gym was difficult for a team that prides itself on being physical, but being able to focus on playing Bunkie helped.

"It's great to be part of something like this," said Miller. "It was great to experience this and be part of Marksville history."

Bunkie coach Nick Pujol had to provide a history lesson for his young squad.

"A lot of our players didn't know anything about" the long rivalry between the Avoyelles Parish schools, said Pujol. "They had never played in it."

For a quarter, Bunkie held its own against Marksville. An unsportsmanlike penalty on Marksville helped stall the Tigers' opening possession after they drove from their own 35 to the Bunkie 37. Deon Prater's punt pinned Bunkie at the 8 for the Panthers' opening possession. Marksville allowed a first down via a questionable late hit out of bounds before forcing Bunkie to punt from its 25.

Marksville began its second possession on the Bunkie 48 and needed just five plays and barely two minutes to score, thanks to a 17-yard touchdown run by Young.

Bunkie couldn't mount a drive, but the Panthers' defense forced Marksville to punt. This time, Prater pinned Bunkie at the 2.

Haydn Williber gained 8 yards on first down for Bunkie, but an illegal motion penalty backed the Panthers to the 5. On the next play, Bunkie quarterback Jaylan Mays fumbled the snap and Marksville's Clifford Champ recovered in the end zone for a 12-0 lead.

"That was a huge turnover - the scoop and score to make it 12-0," said Dunbar. "We were having trouble moving the ball. It was a crucial play."

That fumble was one of three times in the first half Mays had trouble with the snap from center. The Panthers would fumble twice more in the second half, losing one of them.

"Those really killed us," said Pujol of the fumbles. "We're not a team built to come back. We have to kill the clock on drives.

Following Champ's fumble recovery for a 12-0 lead, the Tigers still had trouble moving the ball consistently until their final two possession of the first half.

Kirk Carmouche capped a five-play, 37-yard drive spanning just more than a minute by taking a direct snap on first-and-goal at the 1. Young added the two-point conversion for a 20-0 lead with 3:08 left in the half.

Bunkie went four-and-out, turning the ball over on downs when Mays was knocked out of bounds a yard shy of the first down at the Bunkie 44.

On Marksville's first play from scrimmage, Miller hit Young over the middle. Young broke to the far sideline, before cutting back inside the 10 to score on the 44-yard completion with 42 seconds left before halftime. Miller's two-point run gave the Tigers a commanding 28-0 lead.

The Tigers would go on to add second-half scores by Carmouche on a 58-yard run in which he broke several tackles near the line of scrimmage, and a 1-yard run by Trajan Alexander one play after he rushed 26 yards.

"We've got to run between the tackles, and we accepted that challenge in the second half," said Dunbar, whose team finished with 347 yards rushing. "It was the first game, and we understand what's ahead of us."

What's ahead for the Tigers is back-to-back road games against Many and Lutcher.

What's ahead for the Panthers is another parish rivalry game, this time against Avoyelles.

"Marksville was the better team than us tonight, and they took it to us," said Pujol. "We've got 15 guys playing both ways and we need some of the young guys to step up."